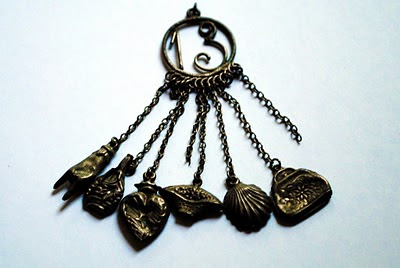 While cleaning out some of my fathers, miscellaneous possessions, I found the item pictured above. Since I inherited dad's curious mind, along with material odds and ends, I set myself the task of learning more about these bits of metal.

The people most likely to have personal knowledge of this curious trinket, my grandparents, father, and godmother, are no longer with us. I'll eventually check with my younger uncles, but, for now, I decided to press ahead on my own.

Since "13" is a number with a lot of superstitious connotations, I started with keywords like "Italian superstitions" "Italian charms" "Italian amulets." Within a relatively short time, I came across the term cimaruta (Chee-Mah-Roo-Tah). After that, my search was easy and profitable. 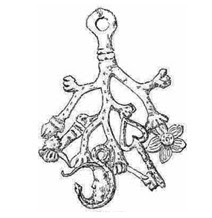 I love to learn about the extras in life: family history, homey artifacts, local lore. In a school setting, inquiry-based and authentic learning makes classes more meaningful to students, empowering them to extend their experiences while acquiring "real" information.

Buffy Hamilton had her ninth graders research their surnames on Ancestry.com. Students might also be challenged to learn more about a family heirloom, local landmark, historic photo, etc.

The possibilities are endless.

Thanks, Jim! I love to find things out - it makes the world a much more textured, nuanced place in which to live. Surely our students would feel the same way, give the chance to move beyond busy work.

I actually gave Vincenza (My sisters Daughter) a sterling silver coral pendant when see was born for its symbolism and its connection with our heritage. So I for one am in line with your guesswork.