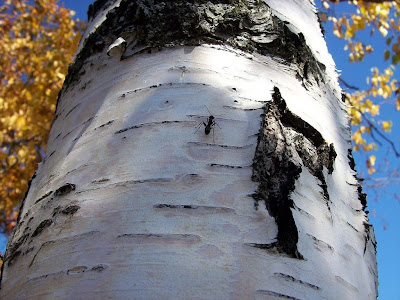 I had intended to blog about The Ant and the Grasshopper, one of Aesop's fables. People in my area of upstate New York are busy getting ready for winter's challenges, and I could draw a number of educational parallels regarding preparation, collaboration, and gathering resources.

But a search for suitable quotes resulted in a slight change of focus.

Philosopher Francis Bacon explained different scientific approaches by comparing the ant, the spider, and the bee:

“Those who have handled sciences have either been men of experiment or men of dogmas. The men of experiment are like the ant; they only collect and use; the reasoners resemble spiders, who make cobwebs out of their own substance. But the bee takes the middle course; it gathers its material from the flowers of the garden and of the field, but transforms and digests it by a power of its own. Not unlike this is the true business of philosophy.”

Aesop's imprudent grasshopper idled away his summer and learned from the industrious ant that "It is best to prepare for the days of necessity."

Bacon, however, found the ants, who "collect and use" less admirable than a bee, which "gathers its material...but transforms and digests it by a power of its own."

The transformative power of the web depends on more than just the tools it provides. It requires planning, creativity, flexibility, and a willingness to continuously monitor and adjust expectations. 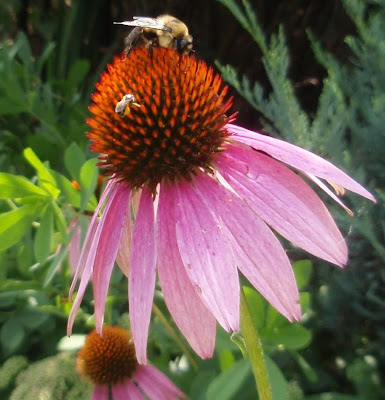 "It is not enough to be busy. So are the ants. The question is: What are we busy about?" -Henry David Thoreau


"Ant on Birch" by E.B. White
All other photos by dmcordell
Posted by diane at 6:45 PM

Diane, thanks so much for sharing this! I was struck by your connection that the 21st Century needs bees who transform what they gather, rather than ants who just stockpile.

Thank you Diane - I really liked that posting, and will be pondering the insects on the WWW rather than the spiders this week!! Beautiful pictures too!!!
cheers gaild

I love the rich imagery. This post has rich potential in an English class.

I like Thoreau's last question, "What are we busy about?" Too many are busy with pettiness.

A bee, however, "gathers its material...but transforms and digests it by a power of its own."

That's a great image for students who are productively creating through Classroom 2.0 technologies.

Thank you for your comment and for mentioning me on your blog. Transformation is indeed a powerful concept. We already have the content: it's what we do with it that differentiates this century from past ones.

I was quite struck by Bacon's metaphor. My daughter and I enjoy taking pictures that capture the unexpected or overlooked - like her portrait of the ant. It's our way to find new meaning in what we see in nature.

I love to incorporate quotes in my postings. One of our most powerful tools will always be language.

Hi, I hope you don't mind but I just included a link to this post in one of my tweets on Twitter, in connection with Darwin:

First came across the quote when studying Bacon's Novum Organum years ago and it's stuck with me since. I was trying to find an example of it to link to and found yours, which illustrates it succinctly.

I like the 21st century relevance you put to it too, so true!

Always happy to be linked.

One of those much vaunted 21st century skills we're trying to teach our students is transformative use of information. Bees do provide an admirable analogy.