The Intersection of Science and Romance 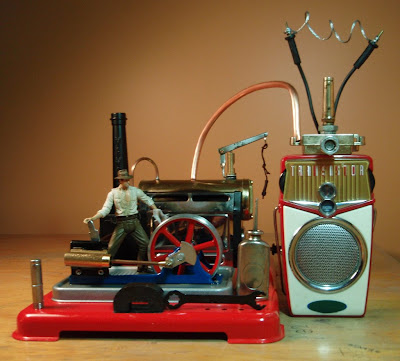 While skimming Google Reader feeds, I often stumble across interesting oddities that fall outside my normal range of interest. Boing Boing's occasional posts on Steampunk would fit into this category. Crafted of copper, brass, and polished wood, the fantastic pseud0-Victorian mechanisms featured there are intriguing works of art.

My husband is an artist with a scientific mind. He decided to use his model steam engine as the basis of a steampunk-esque vignette. To see his notes and explanation of "The (patented) T. Cordell Model 'A' Steam-driven Amplitude Modulated Transistor Radio" visit his photo in my Flickr photostream.

Today is an especially appropriate one for discussing inventions, since it is the birth date of Leonardo da Vinci. Though da Vinci pre-dated the Victorian era by 400 years or so, his lively mind and nimble fingers could easily have created steampunk masterpieces.

The Steampunk Workshop describes steampunk as "Goth, Punk, Geek, and Maker Culture whipped into a delicious melange with a healthy seasoning of political and environmental activism. It's the intersection of science and romance, it's sustainable rebellion."

I see a lot of steampunk jewelry on Etsy too!

Steampunk has an unwarranted nostalgia for me. Unwarranted because I hate kitch - and steampunik is kitch nevertheless - and nostalgia because it touches a memory of a time that I grew out of.

I remember when I was about to go to university in Edinburgh. I lived in Dunfermline which is 20 miles north west of Edinburgh across the Forth River.

I was to be travelling by train there and back daily. In 1964 steam trains were the order of the day and I was besotted with the magnificence of the steam locomotives that hauled their carriages - shades of The Hogwart's Special from Harry Potter.

Unfortunately the steam passenger trains were all taken off the lines that year and I never had the opportunity of travelling to and from university on a real steam train from 1965 onward.

It is a memorable time that will fade into the story books and live on the screen in Harry Potter movies and the like.

In 1968, I did get to ride on a steam train and have a vague memory of cinders blowing in on me from an open window. As American students on a European adventure, my companions and I were more interested in the Beaujolais we had just purchased than in the romance of the rails. Wish I had paid more attention to the train!

I must have been eclectic in my taste, though I never sipped Beaujolais will travelling :-)

I preferred the warm atmosphere of a mid-20th century bar with open fire and brass fender. Nice with a plate of oven baked or sautéd wedges with mayonnaise. Bring on le Beaujolais!

Your bar sounds like the perfect gathering spot for steampunk time travelers!