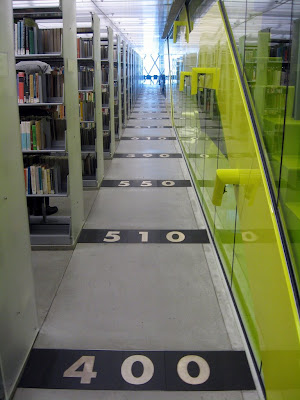 I've been tagged by my good friend, and fellow teacher/librarian, Cathy Nelson, for a meme. Paul C. invites bloggers to write a Top Ten list for 2008 on a topic of their choice. He plans to collect the lists later for our instruction and edification.

A news article that popped up recently in my Google Reader quotes Florida State Senator, Ronda Storms, who "railed against the book-cataloging system during a budget hearing on state library aid, calling the Dewey Decimal System 'anachronistic,' costly and just plain frustrating."

Here is my response to such blasphemy:

Top Ten Reasons not to abandon the Dewey Decimal System

1. The Dewey Decimal System is the norm in most U.S. elementary and secondary schools. Students who learn to navigate the system can apply this knowledge when searching for materials in their local public libraries, which also use the DDS.

2. Melvil Dewey designed the system to be very flexible. Categories that didn’t exist in the late 19th century – computers, space exploration, nanotechnology – can be accommodated by the infinitely expandable decimals.

3. Although the Dewey Decimal System is copyrighted, libraries do not have to pay to use it. Melvil made his personal fortune through selling library furniture.

4. Library staff members quickly become familiar with the ten categories and can point patrons to relevant shelves. The same can not be said of the Library of Congress System, which is complex and less user-friendly.

5. The Dewey numbers always follow in sequence. No matter how large a collection becomes, items are arranged in order, not tied to a physical location.

7. Since the DDS uses numbers, it is not tied to a particular language. Any patron familiar with Arabic numerals can locate materials.

8. Without the DDS, each library would have to create its own system. Interlibrary loans and union catalogs would be difficult, if not impossible.

9. The OCLC, which holds the copyright on the Dewey Decimal System, maintains a database for cataloging and searching purposes and "integrates updates to the DDC almost as soon as they happen through quarterly, electronic updates to WebDewey and Abridged WebDewey."

10. Melvil Dewey was one of the founders of the American Library Association. He elevated librarianship to professional status.

If anyone else would like to contribute a Top Ten list, please be sure to do so and link back to Paul.

Hi Diane,
You have provided a marvelous defence of a system most library goers would not want to be without.

Thanks for participating in the meme and best wishes for the new year.

It was my pleasure! I visit Barnes & Noble and Borders frequently and hate their "system" - not even the clerks are sure where to find things.

In the History section, books are shelved strictly by author, rather than by era, which makes locating titles related to a specific time period (say French & Indian War) difficult.

Sometimes the traditional ways are the best!

Cool--thanks. Yes, I saw it last night actually...
I would have responded then but we were here watching the Wizard of Oz looking for all the "mistakes" this website said were visible/noticeable in the movie. It was a lot of fun to watch that old classic and pick it apart at the same time! Clyde being home always heightens our awareness of film creation.

Your list is AWESOME! THis meme has turned out to be rather FUN--Thanks Paul for starting it.