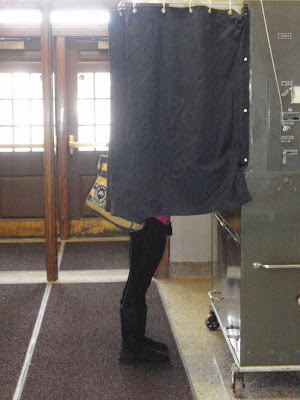 "Democracy is never a thing done. Democracy is always something that a nation must be doing." -Archibald Macleish

Yesterday, our Middle and High School students indicated their choice for the next president of the United States. Although the votes won't count in national election tallies, these young citizens have spent a lot of time discussing the candidates and examining the issues that will affect their futures.

Today, Election Day, spontaneous conversations took place in study halls and corridors, as the students expressed their opinions to classmates and teachers. One young man told me that he liked Sarah Palin's position on the environment; another said he felt that the country needed a change, so he supported Obama.

Even the elementary students knew that something important was happening. Most of the little ones knew the names of the presidential candidates, some were planning to go into the voting booths with their parents.

The results of the upper level voting were: Obama 136, McCain 96. But the real winners were the students, who learned valuable lessons about the democratic process.

What a thoughtful post Diane. This quote is very powerful

Democracy is always something that a nation must be doing.

It was a great day to be an educator.
I agree the lessons were poweful-be an active participant in your government.

Our students need to be aware of the blessings, and responsibilities, living in a free, democratic nation.

And, at least these past few months, I think that some of our young people have come to understand this.