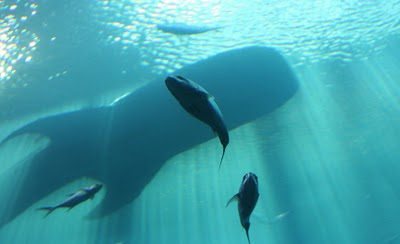 The meaning of the word "leviathan" has evolved from "sea monster" to "Satan" to "whale." In Scott Westerfeld's YA novel, the Leviathan is a genetically altered "beastie" that is combination flying ship and ecosystem.

While reading Westerfeld's imaginative work, it occurred to me that school libraries could be viewed as the latter sort of leviathan.

In the story, an alternate WWI is taking place, pitting "Darwinists," who are the creators of fantastical animal variants, against "Clankers," who rely on mechanized vehicles of war. When the airship Leviathan is under deadly attack, the infusion of scavenged machinery not only provides needed power, but also results in unexpected changes in the living organism. In order to survive and thrive, the creature must incorporate technology into its living body.

Our school libraries have a traditional identity and integrity. But they can't remain static and stagnant. The information society and participatory librarianship demand something else of both the program and its professionals. We need an evolution, not a revolution.

We need a Leviathan.


"Education either functions as an instrument which is used to facilitate integration of the younger generation into the logic of the present system and bring about conformity or it becomes the practice of freedom, the means by which men and women deal critically and creatively with reality and discover how to participate in the transformation of their world." -Paulo Freire


"leviathan" by Stephen Howard
Posted by diane at 1:09 PM