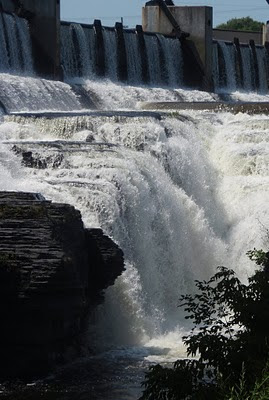 torrent: A large amount of something, especially water or rain; a heavy stream or flow. (Internet, file sharing) A set of files obtainable through a peer-to-peer network... -Wiktionary

This morning I followed a link, shared on Twitter by Kathy Ishizuka, which led me to a blog posting about Kindle e-book piracy.

"Over the months I've received news of the occasional blog post and tweets, but more recently I popped open an alert to learn that my book was being pirated--both as a separate file and part of two larger Torrents called 2,500 Retail Quality Ebooks (iPod, iPad, Nook, Sony Reader) and 2,500 Retail Quality Ebooks for Kindle (MOBI). I had the strange reaction of being both dismayed and weirdly honored that someone had selected my book to strip free of its copy-protection (DRM) and include as part of a collection of 'quality' e-books, many of which were from very good authors."

Since I am nothing if not inquisitive (a good quality for a librarian, no?), I immediately tracked down the Torrents in question. Both are hosted on a site called The Pirate Bay, which lists these stats:
Visitors can search by genres: audio, visual, applications, games, other, or all. Their legal threats page lists a number of challenges and responses, but The Pirate Bay boasts that " 0 torrents has been removed, and 0 torrents will ever be removed."
In his posting Carnoy noted that "the rise of the iPad has spurred some of the pirating, but now the huge success of the Kindle is also leading to increased pirating... At the time of this writing, 668 people were 'seeding' the Kindle collection while 153 people were downloading it."
As a Kindle owner, I have made use of free e-book sites like ManyBooks, even downloaded free public domain and contemporary titles from Amazon. I also purchase items - the one-click shopping, which automatically delivers new e-books to my Kindle, is all too easy to use, a seductive option for a voracious reader.

I don't wish to own everything I read, however. Some books are a pleasant diversion, nothing I would pay for or return to in the future. Our local public library is, of course, a logical source for this type of material. However, the only electronic options there are audio books (which I don't like) and Overdrive e-books, which aren't compatible with the Kindle. New sites like Lendle, which claims to be "The easiest, fastest, fairest, and best way to lend and borrow Kindle™ books," may offer another alternative to buying items.

I haven't knowingly downloaded a pirated e-book, and I don't see myself transferring files via a Torrent for recreational reading. As this posting points out, not all Torrents are illegal (Facebook and Twitter use BitTorrent to distribute updates) , but "Be advised: if you are downloading music or software that you would typically have to pay for, you are likely breaking the law, thus putting yourself at risk."

There are other caveats to using Torrents.

I'm not willing to risk copyright infringement and malware to access a few novels. Let the Torrent sweep through my social networking landscape; it won't be swelling my Kindle pool.

"The Mighty Hudson" by dmcordell
Posted by diane at 9:28 AM

I have been enjoying reading your lesson ideas and little adventures.
Its really impressive..

I have been enjoying reading your lesson ideas and little adventures.
Its really impressive..