A Question of Censorship 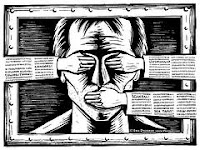 "The fact is that censorship always defeats its own purpose, for it creates, in the end, the kind of society that is incapable of exercising real discretion." -Henry Steele Commager

I find it both ironic and disturbing that even as the ALA conducts its yearly Banned Books Week promotion (September 29–October 6, 2007), there has been an increase in educational blogging about incidences of filtering and censorship in school districts.

Despite being caricatured as "one-dimensional bookish-types", librarians are frequently on the front lines defending First Amendment rights and intellectual freedom. The American Library Association's "Freedom to Read" statement warns that "Most attempts at suppression rest on a denial of the fundamental premise of democracy: that the ordinary individual, by exercising critical judgment, will select the good and reject the bad."

Today, Tim Stahmer, in one of a series of posts on censorship, reminds us that "Schools are supposed to be institutions of learning where students gain the knowledge and skills needed to successfully live and work in the real world. And then we spend large amounts of time, effort, and money trying to block that real world from leaking through the electronic walls."

In other words, if teachers and librarians are not given the tools to provide instruction in the safe and ethical use of technology, how will our students evolve into effective collaborators, communicators, researchers, and critical thinkers?

Karl Fisch describes "two levels of override" which allow for some discretionary unblocking by his district's staff members. The trade off is that although teachers can gain access to "forbidden" sites like YouTube, students are no longer be able to "watch videos on their own, or find videos, or work on presentations that include videos, or upload their own videos."

Clay Burell takes filtering to its logical conclusion: if search engines permit students to click into pornography and other inappropriate data, then all search engines should be blocked.

Or, perhaps, all technology should be banned, blocked, filtered, suppressed, eradicated, wiped from human consciousness.

"We can never be sure that the opinion we are endeavoring to stifle is a false opinion; and if we were sure, stifling it would be an evil still." -John Stuart Mill

"Fear of corrupting the mind of the younger generation is the loftiest of cowardice."
-Holbrook Jackson

"Censorship of anything, at any time, in any place, on whatever pretense, has always been and always be the last resort of the boob and the bigot." -Eugene Gladstone O'Neill

Too exhausted to say more right now than the obvious: fantastic post, fantastic selection of quotes to support us all.

Off-topic a bit, Diane, but...you should save all your quotes from archive limbo by setting up your own Quotiki account so that I and other fans can embed your quotes with a widget. I'd love it.