A Space Beyond Measure 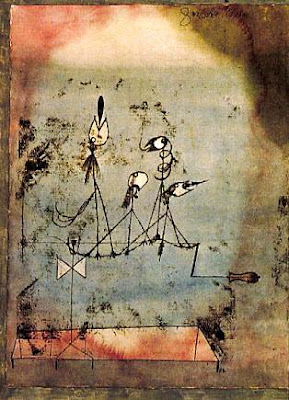 "The 'Twittering Machine' is neither ironic or idealizing, but rather a product of the imagination, which Paul Klee's art affirms at every turn. Crank it up, and these strange, mechanical birds start to sing their hearts out against a vast, atmospheric wash backdrop that opens up a space beyond measure." -Fine Arts exam, California State University

Twitter as experiential art; conversation as creation: for those who have integrated Twitter into their lives, such claims are validated each time the connection is enabled.

Discussions continue about the value of this interactive and still evolving "social networking and micro-blogging service". In a previous post, I shared my initial reluctance to hop on yet another cyber bandwagon. Now I'd like to add some additional insights gleaned from other edubloggers.

Scott Schwister traces his "Twitter awakening" to an invitation from Carolyn Foote, who gently urged him to visit because "It's developed into a really fun and amazing little place." Scott took note of the incredible diversity of the Twitterverse, where you could learn about new apps, carry on a deep and rich conversation, shop for T-shirts, or invent a new poetic form.

In Twitter is my Village, presentations consultant Laura Athavale Fitton describes Twitter as a venue for becoming better acquainted with "a critical mass of interesting people". She emphasizes the socially connective function of this type of network rather than its professional applications.

A number of bloggers have been posting tips on how to increase the functionality of Twitter. Dave Fleet explains how to find people to follow, an essential step in building a unique, personal twitterverse. Wesley Fryer explains changes that make it easier to carry on Twitter conversations. Once connected, individuals find mentors, ask for help in locating information sources or plan collaborative projects.

Humor is an essential element, at least on my Twitter network. Brian Van Dyck offers a Twelve Step Program for those who slide into Twitter addiction and want to take back a part of their lives. Lisa Parisi blames her procrastination on the irresistible allure of Twittering.

The creators of Twitter have been promoting it as a useful tool in times of crisis.

"There have been raging wildfires and rumbling earthquakes inspiring avalanches of Twitter updates over the last few weeks [November 2007] out here on the West Coast of the US. In Tumultuous times, people turn to Twitter."

Twitter even made a guest appearance on CSI, surely a sign of some measure of social cachet.

Twitter appeals to a large community of committed users. Whether it continues to refine its capabilities or yields to an even more sophisticated form of networking remains to be seen. But for now, Twitter is the social network of choice for a significant population of educational bloggers. It offers a "space beyond measure" in which to explore, connect and expand.

"Through space the universe encompasses and swallows me up like an atom; through thought I comprehend the world." -Blaise Pascal
Posted by diane at 9:01 PM

Summed it up perfectly - it truly is my "social network of choice". I open twhirl before my email, I hardly check Google Reader anymore b/c everyone tweets when they've written something new (how I got here so soon!), and it seems so old-fashioned to go to my nings and write a reply and then wait, wait, wait for a response. Twitter is real-time, and that's how my mind works. Makes working late into the night on course outlines a lot less boring as well, since I have my Australia/New Zealand ladies to keep me entertained :-)

You are both part of my Twitterverse and one of the reasons why it is so much fun. We connect, we interact, we support each other, we grow together.

Who could ask for more!

Thanks for the link to my 12 Step Program for Twitter. I enjoyed your article, you really did sum up the realm of twitter. I enjoyed reading your blog posts, I'll come back for a visit and comment on a few of your other posts. See you out in the Twitterverse.

Probably one of the most intelligent posts about Twitter that I have seen, and laced with many resources. Thanks for the link and the thoughts.

Now, can you say that in 170 characters or less?

Do you also have a support group for families of recovering Twitterholics?

in the/ silence /truth

What a wonderfully thought provoking post on Twitter. I so enjoyed reading that and I'm looking forward to following up on those links. Thank you for sharing them and your thoughts.

A beautifully crafted analysis of the essence of Twitter. And I'd venture that its success is due in part to hitting a vital balance point -- inclusive without being overwhelming; i.e., one can select the conversations to 'follow' yet still 'eavesdrop' on and reach out to new people... Or perhaps the key is simply that brevity is, as Shakespeare said, the soul of wit.

I’m also trying to explain Twitter to the uninitiated so I appreciate the perspective and excellent resources you bring to the discussion with this post.

Twittering makes perfect sense to a lot of people—it just happens to make sense for a million different reasons.

Twitter is so very addictive, but it is also great bringing people closer. I have made so many friends with Twitter.