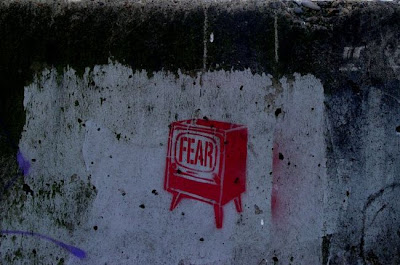 "Of all tyrannies, a tyranny exercised for the good of its victims may be the most oppressive." -C. S. Lewis

Clay Burell pointed me to a video made by his guest blogger, Bill Farren, entitled I'm Afraid Not.

I shared this masterful little clip with my high school Current Events class, then asked them to comment on what they thought it meant.

What is the point of view of this video?

How does the "fear factor" apply to your life?

How much freedom are you willing to give up to feel safe/secure?

Is this an effective video?

What do you think the title I'm Afraid Not means?

I won't critique their comments, except to note that in their responses, some of the students (6 high school boys) transposed the words in the title, changing it to "I'm Not Afraid."

What is your reaction to I'm Afraid Not? Would your students agree or disagree with mine?