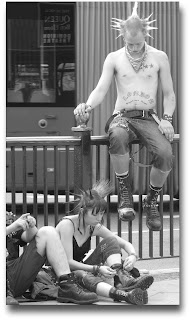 “Punk-related ideologies are mostly concerned with individual freedom. Common punk views include the DIY ethic, non-conformity, direct action, and not selling out.” –Wikipedia

It appears to have been started by Jim Groom, expanded by Mike Caulfield, and is now being blogged about by Doug Belshaw, Jennifer Jones, and David Warlick, to name but a few.

My understanding of "edupunk" is that it refers to a philosophy of freely exploring, sharing, and conversing about Web 2.0 applications. Like all counter-culture movements, it draws on the energy and commitment of its adherents.

At first, the whole concept sounded strange, even ludicrous. But by putting it into a familiar context - the hippie subculture of my younger years - I could see how and where this new revolution is happening and what the next "new world order" might look like.

It's all about conversation, action, interaction: participate, educate, liberate.

I think I get it now. 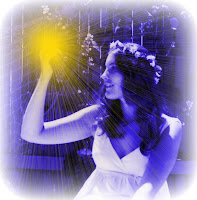 "Hippies sought to free themselves from societal restrictions, choose their own ways, and find new meanings in life...Although not as visible as it once was, hippie culture has never died out completely: hippies and neo-hippies can still be found on college campuses, on communes, and at gatherings and festivals. Many embrace the hippie values of peace, love, and community, and hippies may still be found in bohemian enclaves around the world." -Wikipedia

"Punk ain't dead" by ThisParticularGreg
"We are stardust, we are golden..." by SuziJane
Posted by diane at 8:12 PM

I really like the way you summarize this concept, and morph it to fit yet another subculture you are more familiar with. Brain Lamb has been playing a bit with the questions of folk punks or punk hippies (listen to the songs by David Peal in particualr) http://weblogs.elearning.ubc.ca/brian/archives/046609.php

In this post, and I think the idea of a movement may be less important than the values you listed:

"...a philosophy of freely exploring, sharing, and conversing about Web 2.0 applications. Like all counter-culture movements, it draws on the energy and commitment of its adherents."

It's all about conversation, action, interaction: participate, educate, liberate."

And while Web 2.0 certainly plays a role in online learning as we know it, I think the idea that we can and should converse about a whole range of ideas, beliefs, and experiences that foster a network of individuals sharing and creating together (it does sound a little hippeie, doesn't it :) ).

Regardless, sometimes if a set of principles we relate to and draw inspiriation from leak over into our work and passsion, we might have some more imaginative ways to approach, we may also might stifle it with too much of an agenda.

Regardless, I think you have something here.

And so.... Taylor is off in search of a bohemian enclave.

But why does it always seemed to be associated with weird hair? ;-)

I've been amused by the spiked hair I see in our high school, never thinking to compare the punk philosophy to that of my "enlightened" hippie nation.

Every generation brings its own group of searchers. The interesting thing about eduPunk is that many of the "rebels" are coming from the ranks of the establishment.

Taking content/information and examining, reworking, extending, and sharing it FREELY is an exciting concept.

These are exciting times to be alive.

You start the enclave, we'll join you!

My hair was waist-length in the 60s and "heavy".

These days, it is funky in humidity and always ready to do its own thing.

Any movement with "weird hair" was just made for me :-)

I guess we could call ourselves eduhippies........but that sure doesn't sound as cool. I think I would rather be punk than hippie.

My formerly punk self is *so* thrilled with this ;-) The work I've done for the past 10 years has always felt a little subversive. I always felt as if I were following the spirit of the "law" and not the letter. It's good to be part of a group pushing the envelope and seeking out like-minded folks with cool hair. Even if it is slightly graying...

Now, can we have a theme song? Maybe some Clash?