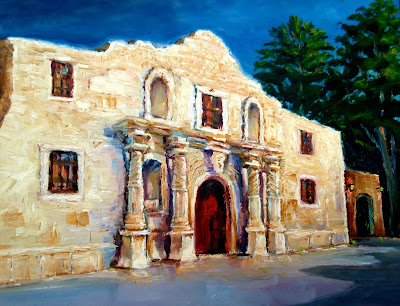 "In the southern part of Texas, in the town of San Antone,
There's a fortress all in ruin that the weeds have overgrown.
You may look in vain for crosses and you'll never see a one,
But sometime between the setting and the rising of the sun,
You can hear a ghostly bugle as the men go marching by;
You can hear them as they answer to that roll call in the sky:
Colonel Travis, Davy Crockett and a hundred eighty more;
Captain Dickenson, Jim Bowie, present and accounted for."
-Marty Robbins, Ballad of the Alamo

One of the most highlights of my trip to NECC this year was a visit to the Alamo.

As a child of the '50s and '60s, I grew up with some TV heroes. Most of them were cowboys, with one shining exception: Davy Crockett, King of the Wild Frontier. 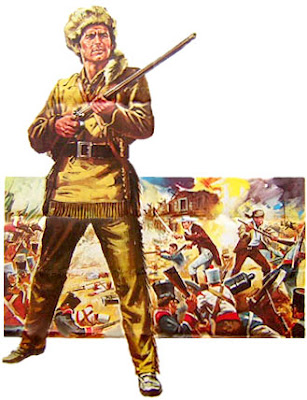 I understand that the Disneyfied version of this real American was occasionally (O.K. mostly) short on historical accuracy, but my further reading and research on David Crockett never dislodged my affection for this icon of my youth.

My husband shares the same generation and the same sentiment. One of the most meaningful moments for him, of our vacation in California a few years ago, was a visit to the Fess Parker Vineyards, where he posed for a picture with the portrait of our childhood idol.

I realize that the story of the Alamo and the Texans' fight for independence from Mexico is a complicated one. But I found myself in tears as I stood in the old mission building that many people regard as a shrine.

To commemorate this visit, my husband created a painting for me. It is one of my chiefest treasures and dearest mementos of San Antonio.


" In the southern part of Texas, near the town of San Antone,
Like a statue on his Pinto rides a cowboy all alone.
And he sees the cattle grazin' where a century before,
Santa Anna's guns were blazin' and the cannons used to roar.
And his eyes turn sort of misty, and his heart begins to glow,
And he takes his hat off slowly to the men of Alamo.
To the thirteen days of glory at the siege of Alamo."
-Marty Robbins, Ballad of the Alamo 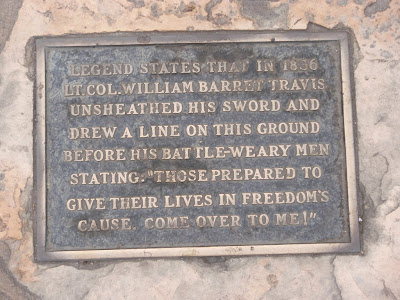 "Sunset" by Tim Cordell
"Davy Crockett Poster" from tvparty
"Line in the Sand" by dmcordell
Posted by diane at 11:47 AM

A gorgeous piece!! I am awe struck!!

I'm so lucky to have an artist in the house...most of the time.

Think I'll post about it - thanks for the idea.

And yes, it is gorgeous.

Great piece. I love history, both the reality and the mythology of it. Just to add to your post here is the link to the marty robbins song on You Tube and a very nice presentation of Travis' letter appealing for aid posted on Teacher Tube. teacher tube is a little slow, so I suggest that you allow it to buffer before running that video. I hope to cross-post to your Plurk for that segment of the PLN.

Thank you for the links! I find the Marty Robbins song very moving, particularly the image of the lonely cowboy honoring the memory of the brave men who died at the Alamo.