Seven Things You Don't Need to Know about Me 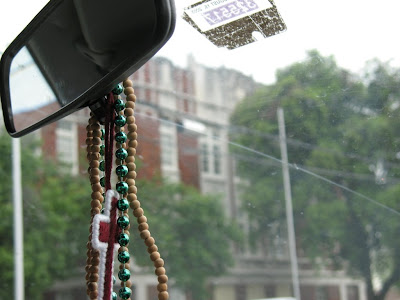 Liz B. Davis tagged me for this meme. It gave me an excuse to stroll down Memory Lane and pull out random facts about my life:

1. I can’t whistle, except by inhaling; I can only snap the fingers on my left hand.

2. I was a Camp Fire Girl (before the organization became co-ed).

3. I love to travel, have seen “the glory that was Greece and the grandeur that was Rome,” but my favorite city is still London.

4. During summer study at Oxford University, I had a small part in a production of King Lear.

5. Although I started college as a Math major, I graduated as an English major.

7. The first time I visited Yankee Stadium was to attend a Mass celebrated by Pope Paul VI.


In keeping with my "no stress now that the holidays are almost over" policy, I'm not tagging anyone specifically. This is a fun exercise, though, so I'd encourage anyone who has a few spare minutes to play along and give us a behind-the-scenes look at your life.


"Rearview Mirror" by cammyrw
Posted by diane at 4:41 PM

1. Same with me on snapping except the other hand. I can whistle in and out.

2. No one I know seems to remember the CFG song with WO HE LO in it...do you?

3. I love to travel too - the most exotic (outside the US) places I've visited are Cabo (Mexico) and Costa Rica. No Europe...yet.

4. Nothing even remotely comparable.

5. I had about a dozen majors, most of which have nothing to do with what I do now.

7. My son made it to Yankee Stadium last year; I never made it. But I have been to perhaps 15 other MLB parks.

Re. #4: I also played Amaryllis (in the Music Man) in our high school play, but somehow that didn't sound quite as exotic as tackling Shakespeare at a distinguished University!

Re: #4 I have been to many plays and have enjoyed most of them and even know people that have actually acted. Thank you very much.;-)

Thanks Diane. I'm glad it was an enjoyable meme (I know they can be annoyingly chain letterish sometimes). I appreciate learning a little more about the non-educational you.
-Liz
(I was a brownie, but never a camp fire girl or a girl scout).

Diane, how do you tag someone and what's a meme? Thanks!

Although definitions vary, most of my online friends use the word "meme" to describe a sort of chain writing activity.

You "tag" a person by naming them and linking to their blog. They link back to you, do whatever writing task (usually a list) that's required, then tag others, in turn.

The tagger might also send an email or Plurk/Twitter message to let people know that they've been tagged.

Does that answer your question?

#2. I was a Camp Fire Girl too!! My ceremonial gown is still hanging in my closet.

Yep, sure does, and thanks! Happy Holidays!
P.

We didn't have ceremonial robes, but we did wear blue vests on which we sewed all our patches and beads.

I worked one summer at our local Camp Fire Girls camp and had a blast canoeing, hiking, and trying a variety of crafts.

For some strange reason, in our town the girls in public school joined the Girl Scouts, while those in parochial school became Camp Fire Girls. All of the boys were in Boy Scouts.

Happy holidays to you, too!

I could claim that I can't count to seven but that would be cheating. I've actually been known to get past 10 but I have to take my shoes off!

2. Though I haven't a fear of heights and I like hillclimbing, I don't like rock climbing or mountaineering. The only similar sport that I dislike more than these is potholing.

3. Of the many years spent in three different countries, I enjoy living in NZ the best - that's why I've lived here for 34 years. Scotland is too cold in the winter. Malawi is nice - called Nyasaland when I lived there as a child.

4. At Downstage Theatre in Wellington in 1980 I had a part in the play, The Suicide by the Russian playwright Nicolai Erdman, director Phillip Mann. The season ran for 4 weeks and the play was extremely successful with a cast of 16 actors and one fiddler. I was the (token) gypsy fiddler. I never spoke a word on the stage.

5. The only reason I was 7 years studying at university was procrastination. At a time when I was about to go on to study teaching after I had graduated the first time, I was offered a post-grad grant. I went into teaching 3 years later.

6. When my oldest son, Nicolas was just over 2 years of age, he could catch flies in mid air. He never harmed them. He caught a wasp once, examined it closely then let it go and wasn't stung. Only recently I found that I had the same talent, though in over 50 years I'd never tried to catch a fly. I found that I had this dubious talent when my daughter, Hannah, kept a pet female brown tree frog, Rocket, in a large vivarium. Rocket needed live food and lived for almost 4 years on what I caught for her - a record age for female Australian brown tree frogs, who live in the wild for only 16 months on average.

7. I was born Church of Scotland. I've studied several religions, including Buddhism. My wife was the Anglican parish secretary for years in Island Bay where we live and continues to attend Church regularly. My youngest daughter Catriona travelled to Fiji and lived there for almost a fortnight while she pursued her Anglican mission. I've played music at the Church and read readings. I've read the Bible - a goodly book that I enjoy reading - and know many quotes. But I'm not religious in the least. I stopped attending Church with my wife a few years ago as people got the wrong idea. They couldn't understand my acceptance of the Church versus my personal belief.

Thanks for the fun excercise Diane.

Catchya in the New Year
from Middle-earth

It was great learning more about you! I was in the Brownies but never made it to Girl Scouts. Thanks for sharing!

Hi Diane,
Summer study in Oxford and a role in a Shakespearean play? Wow!

I did very well in Latin, partly because of my experience singing Latin hymns in choir, partly because I viewed translations as a puzzle I could solve by fitting words in context.

I've never lived in another country, except for my summer in England, and envy you the experience.

Your fly-catching expertise amazes me - the only sport I was even competent at was bowling, and I suspect my fine motor skills are on the low side of the spectrum.

My upbringing was Roman Catholic, and I loved to attend Evensong at Oxford, but my current beliefs are fairly close to yours.

Thanks for checking in - nice to have you home again!

I grew up in a small town during a time when European trips were uncommon for children of the middle class. My stay at Oxford, visits to London, Bath, Stratford on Avon, and our 2-weeks of travel through Amsterdam, Paris, Cologne, Trier, and Bruges opened my eyes to the infinite variety of a wider world.

The whole experience was definitely a Wow of the highest order!

With every meme you participate in I realize why you are so intellectual and way out of my league! I'm so glad we are friends.

With every posting you write, I realize realize how knowledgeable you are about technology and 21st century skills and way out of my league! I'm so glad we are friends. ;-)

Instead of just reacting to Diane's original post, here are my Seven Things:

2. My oldest son and I share a passion for all things baseball - he’s so knowledgeable about baseball and the players that I truly think he’d be a good General Manager for a MLB team. He’s even authored some articles in national baseball publications. We both compete in a Strat-O-Matic baseball league with 18 other baseball fans (SOM is a statistically-accurate simulation game that has been around since the 1960s).

3. When I was 18, my best friend from HS and I hitchhiked from MN to CA during Xmas break (with less than $100 between us), only to find that the guy we’d come 2000+ miles to visit has flown home to MN. We made the best of it, saw some of the country we'd never seen before, met many interesting people and made it home safely (and hungry). It took us 2 weeks to make the round trip and we ran out of $$ long before getting home. The kindness of strangers got us through it. I kept a record of all of our rides along the way and still have those 37 year old scraps of paper stashed away, somewhere… It was a classic case of the journey being the memorable part, not the destination. I’ve been a traveler ever since.

4. I had no idea what I wanted to do for a “career” until I had a conversation with a new friend at a softball game (in which our wives were playing) where I listened to him tell me about how and why he got into teaching. I was 29. The idea of being a teacher was new and so appealing to me that I got my certification, did my student teaching a year later and have been involved in education now for 26 years.

5. I got my first dog as a Christmas present (with my brother) when I was 11 and have had one or more dogs as family members almost continuously since then. We have two dogs now - that seems to be the ideal number for us.

6. The first live rock show I saw was The Doors, in 1968. Other concert highlights include The Who, Pink Floyd, Led Zeppelin, The Band, The Rolling Stones, Neil Young, Bob Marley, Bob Seger and many more. The best concert I’ve attended recently was Rilo Kiley - Jenny Lewis is an amazing talent.

7. I’ve been to NYC just once – I can’t wait to go back - and managed to get in the front row for a Letterman show at the Ed Sullivan Theater. We thought that was special until we learned that people in the aisle seats are the ones that get all the attention. We just weren’t cute enough! (LOL)

Diane, I have NEVER met or heard of anyone that can only whistle by inhaling. I thought I was the only person in the world with that quirk. It is the only way that I have ever been able to whistle and it still irks me a bit to this day. As you know, it is a bit harder to carry a tune inhaling.

From another weird whistler
Frank

Jeff,
Fascinating stuff - I envy you that Doors concert, thought I did get to see the Who a few times.
You've had quite a few adventures. There will be many more ahead, I'll bet.

Frank,
Should we start a club? Let's not call it weird, let's call it alternative whistling.