The Prevailing Common Sense of the Field 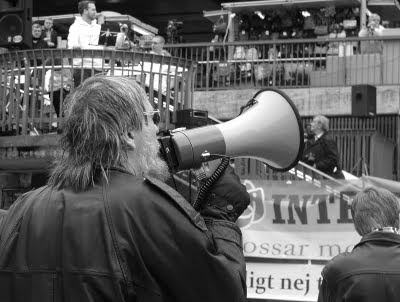 librarybeth Conference Humiliation: They're Tweeting Behind Your Backs (Chronicle) http://bit.ly/RmPWE

and led me to Marc Parry's posting about "twecklers."

At the recent AASL Conference, Rev Up Learning, participants tweeted non-stop during the keynotes and sessions. Most of us were too busy recording salient points to engage in idle chit chat. I know that I used these streams of tagged comments as a virtual notebook, a way to capture key concepts for later evaluation.

But what if...the presentation were more of a Death by PowerPoint...say, in a mandated professional development workshop or a faculty meeting? Is engaging in backchannel exchanges rude, inappropriate, counterproductive?

One of the commenters on Parry's posting defends Tweeters, suggesting that

Another, sees tweckling as a positive force:

"The pressure is on conference organizers and keynote speakers - choose the speakers wisely and the speakers had better be prepared (and engaging as well). This is part of a quality improvement movement, and I'm all for it."

There were those who disagreed:

"I read the transcript of the back-channel talk. Sure the presentation may have been dated and generally awful, but I can't see that all the twittering added anything constructive. It was childish. Another thing that twitterers might want to consider is that when you defame someone via twitter you are doing so publicly, and could be opening yourself up to a lawsuit."

A study done by the University of Leicester, Twittering the student experience, highlights some of the positive educational uses of Twitter. No mention is made, however, of tweeting in the lecture hall.

In our connected world, we're frequently making things up as we go, trying to reconcile new tools and old protocol. What are the rights and responsibilities of attendees at workshops, conferences, lectures, and meetings who choose to engage in backchannel discussions?

Are there "rules" - should there be?