The Most Beautiful Deception of All 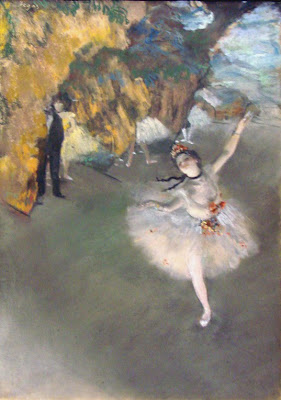 On Saturday evening, my husband was one of the participants at an event hosted by the Saratoga Performing Arts Center, presented in support of the Hyde Collection's "Degas & Music" exhibition.

In their works of art, music, dance, and literature, the Impressionists celebrated light, movement, and sensation. "Reality" was viewed subjectively; "truth" was a matter of personal interpretation.

I decided to do a bit of research about both Edgar Degas, and Claude Debussy, a composer whose work I deeply enjoy (both my daughter and I walked down the aisle to Debussy's music: "Clair de Lune" for me, "The Girl With the Flaxen Hair" for her). Some of what I discovered surprised me.

For example, Degas and Debussy both disliked being labeled Impressionists. Degas was not an "en plein air" advocate, but preferred working in his studio. "No art was ever less spontaneous than mine. What I do is the result of reflection and of the study of the great masters; of inspiration, spontaneity, temperament, I know nothing."

Both men talked about about the importance of infusing art with imagination:

"A painting requires a little mystery, some vagueness, some fantasy. When you always make your meaning perfectly plain you end up boring people." -Edgar Degas

"Art is the most beautiful deception of all. And although people try to incorporate the everyday events of life in it, we must hope that it will remain a deception lest it become a utilitarian thing, sad as a factory." -Claude Debussy

Degas felt that "Drawing is not what one sees but what one can make others see." Debussy described music as "the expression of the movement of the waters, the play of curves described by changing breezes" and "the silence between the notes."

In the late 1880s, Degas developed a passion for photography. He took pictures of some of his friends and occasionally referred to photographs for reference in his artwork. He never stopped creating and learning. It is said that on his deathbed, Edgar Degas muttered "Damn, and just when I was starting to get it!"

Hearing the music that entertained and inspired a great artist helped me to put his works in context. I'm looking forward to seeing Degas' works at the Hyde; hopefully, something like Prelude to the Afternoon of a Faun will be playing as I wander through the galleries.

"Some people wish above all to conform to the rules, I wish only to render what I can hear. There is no theory. You have only to listen. Pleasure is the law." -Claude Debussy

"People call me the painter of dancers, but I really wish to capture movement itself." -Edgar Degas

Nice post! I liked your picture of Tim painting at the event.

This is a wonderful, well researched post. Painting and music infusing the imagination...I saw the painting you included last year in Paris and this adds new light to Degas' work. Also the video of Debussy's music fuses art and the visual so well, stimulating the senses, adding mystery and wonder.

Shall I get his autograph for you ;-)

Thank you. I visited Paris as a student, in 1968. At that time, the Impressionists were housed in the Musée du Jeu Paume. These paintings were a revelation to me, and I never forgot them. Debussy has the same effect on me, musically.

"Mystery and wonder" sums it up beautifully.