Some Measure of Protection

Today, I received my first monthly retirement benefit from the federal OASDI program.

It wasn't a huge amount, but combined with a teacher's pension and my husband's Social Security check, we'll have enough to maintain our modest life style.

Tim was born in 1946, part of the first wave of Baby Boomers. I'm 10 months younger. We've been employed for most of our adult lives, although I took a "break" when our two children were born.

Even though we've officially "retired," both of us continue to work part-time, when opportunity offers.

The original Social Security Act was signed into law in 1935, by President Franklin Roosevelt. It was designed to be funded by payroll taxes, and, since 1982, income has exceeded payouts.

As my generation reaches retirement age, however, that may no longer hold true. Some projections anticipate that, within a decade, the Social Security Trust Fund will have to begin drawing on its Treasury Notes in order to cover increased expenses. 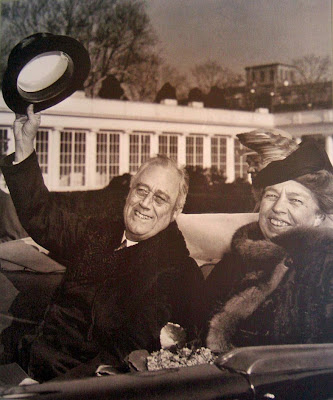 That's what I desire for myself and my family, "some measure of protection...against poverty-ridden old age."

I want what I worked for, all those years.


"Social Security poster" from Wikimedia Commons
"Franklin and Eleanor..." by Tony the Misfit
Posted by diane at 5:28 PM

I am so excited for you! I can't wait until we reach that day (if there is still money in the pot when we get there!) Enjoy it because you deserve it!!

Thanks, Pat! We'll try not to go hog wild with all the money. There may be some left for you, but I fear for my children's futures.