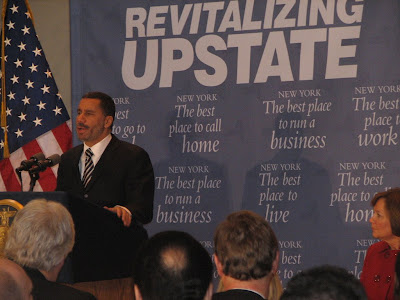 On March 12, 2008, Eliot Laurence Spitzer resigned his position as governor of the State of New York and was replaced by Lieutenant Governor David Paterson.

Paterson inherited a state economy that has been characterized by budget director Laura L. Anglin as "officially in recession." The governor is seeking a hiring freeze and hopes to reduce state agency spending by an additional 7%. State legislators will be asked to return to the Capitol from their summer recess to consider what and how much to cut from budget allocations. Governor Paterson said school aid and other funding areas "highly protected" by the Legislature will be considered.

Politicians and advocacy groups are already girding for battle. And the public is starting to weigh in.

"Why not publish the teachers salaries and benefit packages, like they do for each union. Do the School employees (janitors, clerks, secretaries) pay for health insurance, dental, vision. If not, why."

"State agencies have already had their budgets cut 3.35%. Can the rest of the massive spending programs such as education, housing, medicaid, etc.. been cut as well? The answer is NO! 90% of the massive state budget goes towards entitlement programs. It is time to tighten the belt in all areas of the state budget. NY State is in this mess because of the generous increases in these programs over the past five years."

How many citizens secretly - or overtly - agree with this viewpoint?

"It doesn’t matter what this guy says or does, the scumbag school teachers will still get there fat raises and free medical across the board while the rest of the free world has to work for a living and watch their taxes go up and up and up and up. Oh, it’s for the 'chilren'."

Much is made of the fact that the [New York] city and state teacher unions spend large sums of money lobbying for education legislation. Is this type of vying for political favors moral? expedient? a necessary evil?

What would you say to the taxpayer who seems to feel that teachers are being taken care of at the expense of those who have to "work for a living"? How would you convince them that it is, indeed, for the "chilren"?

"Education costs money, but then so does ignorance." -Sir Claus Moser


"Governor Paterson" by jcommaroto
Posted by diane at 6:13 PM