Today my daughter and I visited the Gardens at Yaddo, a grand home that has been preserved as a working artists' community.

Yaddo was owned by Spencer Trask, a New York City financier and Katrina Nichols Trask, his wife, a published poet. Legend has it that the name "Yaddo" was suggested by four-year-old Christina Trask's charming mis-pronunciation of the work "shadow."

When all four of the Trask children died within a one-year span, possibly during a diphtheria epidemic, the heartbroken parents decided to form what became the Corporation of Yaddo, endowed in perpetuity to serve as a creative retreat for artists.

The buildings and cottages on the estate are only rarely opened to the public, in order to maintain "uninterrupted time to work, good working conditions, and a supportive community" for the residents.

Visitors are welcome to stroll the gardens, however, and enjoy the serene beauty of its flowers and fountains.

The Rose Garden is based on Italian classical gardens that the Trasks had seen in their travels abroad. There are four statues representing the Four Seasons, and a statue of a youth, "Christalan" which serves as a "memorial to the children of this house." Christalan represents youth, chivalry, and victory over mortality. 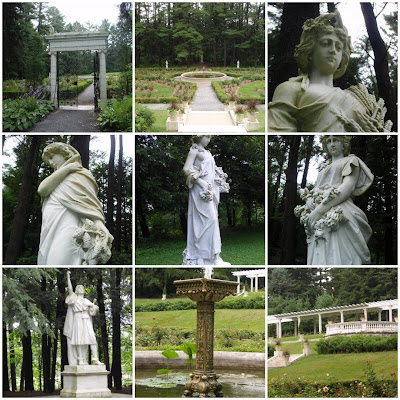 On the marble balcony, there is a sundial inscribed with a poem composed by Henry VanDyke, a friend of the Trasks: 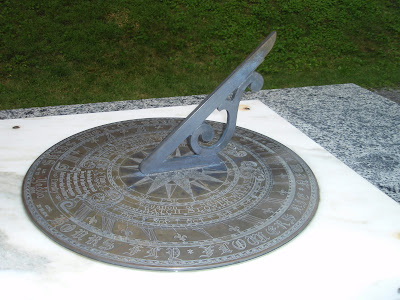 To see some of the roses in the garden, please click below and visit my Flickr set The Rose Garden at Yaddo

What a tragedy to lose all their children.
Wealth did not spare them the sadness but allowed them to sustain and support others.
Thanks for the pictures. The statues are really something!

My second posting features the Rock Garden - doesn't have the heavenly scent of the Rose Garden, but its shady glades and merry little streams are more to my taste than the formal gardens.

Next up will be some of my daughter's thoughts & photos - you'll love her take on the statues!

I am having a lovely time going through your past posts searching for that post where I had to talk about a past career that has prepared me for teaching. I should have read this one before I asked you those other questions. How did you put all the photos into a patchwork front slide?