The Form of Information 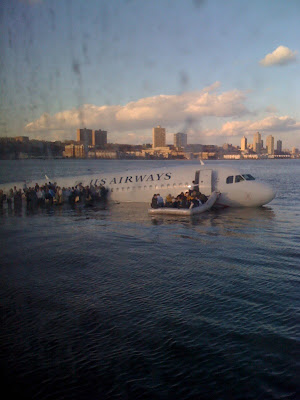 The January 15 crash-landing of US Airways flight 1549 dramatically demonstrated the value of cool heads and intense preparedness training in a time of disaster.

It also provided a real-life illustration of how modern technology can be used for more than trivial messages and inane video clips.

Passengers on the plane sent what some thought might be farewell messages to their families. Witnesses on the ground, in the metropolitan New York area, relayed the sights and sounds of the incident via text messaging and Twitter. Pictures, like the one above, were taken with cellphones, then shared on Flickr and other online photo-sharing sites.

Although emergency personnel were already aware of the situation, eyewitnesses were able to share information with the world-at-large in real time.

The public followed the unfolding drama and rejoiced at its happy ending.


“In this electronic age we see ourselves being translated more and more into the form of information, moving toward the technological extension of consciousness.” -Marshall McLuhan
Posted by diane at 10:29 AM

Diane, I think this is one of the most amazing examples of the power of citizen journalism. I first learned about this incident from Twitter and then was able to follow-up and learn more about it through the resulting news stories. I know certain news outlets were also assisted by these citizen journalists and the quality and depth of the reporting was immensely improved. As you say, in the midst of all of the chatter (trivial messages and inane video clips), there is true value. Sorting it out may be the challenge for most.

A cousin of someone I work with was out working on his boat on the Hudson when heard over the radio that A plane had gone down in the river. He was only a mile away so he went over and was able to get some passengers safely onto his boat. It was an amazing story!

I'm constantly sharing news with my husband that I glean from my online sources.

Some of the items and issues never make our local paper. I often wonder how many significant events quietly slip our notice.

It surely is an amazing story. We got to witness true heroes, not just celebrities acting badly.