The Loftiest of Cowardice 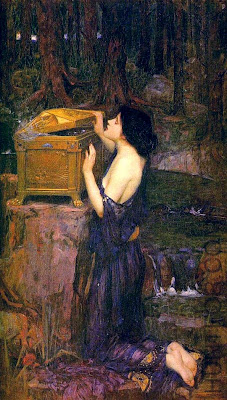 "Fear of corrupting the mind of the younger generation is the loftiest of cowardice." -Holbrook Jackson

A recurring motif in literature is the desire to gain forbidden knowledge, which always results in a punishment of some sort: acquisition of understanding intertwined with loss of innocence .

"But the woman took off the great lid of the jar with her hands and scattered, all these and her thought caused sorrow and mischief to men. Only Hope remained there in an unbreakable home within under the rim of the great jar, and did not fly out at the door..." Hesiod, Works and Days

"... but of the fruit of the tree which is in the midst of the garden, God hath said, 'Ye shall not eat of it, neither shall ye touch it,lest ye die.' And the serpent said unto the woman, 'Ye shall not surely die; for God doth know that in the day ye eat thereof, then your eyes shall be opened, and ye shall be as gods, knowing good and evil.' And when the woman saw that the tree was good for food, and that it was pleasant to the eyes, and a tree to be desired to make one wise, she took of the fruit thereof and ate, and gave also unto her husband with her; and he ate. And the eyes of them both were opened, and they knew that they were naked; and they sewed fig leaves together, and made themselves things to gird about." Genesis 3:3-7, 21st Century King James Version

Banning & censoring books, filtering the Internet may appear to protect our children, but at what cost?


"You can cage the singer but not the song." -Harry Belafonte

"Pandora" by John William Waterhouse, Wikimedia Commons
Posted by diane at 10:41 AM

knowledge doesn't corrupt- it paves the way to the fullest incarnation of whatever you are. so says me, at the moment, anyway. the bible states that god forbid the fruit of the tree of knowledge, "For God doth know that in the day ye eat thereof, then your eyes shall be opened, and ye shall be as gods, knowing good and evil." Genesis 003:005

...implying that gods possess knowledge of good and evil. And, presumably, proceed from that awareness.

Choices that are made from ignorance aren't really "choices."

I think many young people would smirk at how much they know compared to what their parents think they know.

My concern is for many younger children who seem to be exposed to so many images and influences at a young age.

Teachers tread a precarious path here. They are best situated to deconstruct and help students undertand these influences.

It saddens me when some great books still get banned because of parental pressure.

That's precisely why issues like cyber safety need to be addressed in the curriculum. Many children go home to unsupervised computers; many parents lack the skills to adequately supervise their offspring's Internet use.

Ignorance is not safety, it's ignorance.