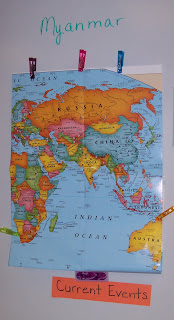 "News is any new information or information on which is relayed by print, broadcast, Internet, or word of mouth to a third party or mass audience." -Wikipedia 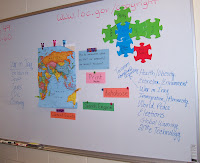 In Friday's Current Events class, the students listed some significant social or political issues presently in the news.

Using our local paper as a quick reference resource, I pointed out two stories of which they were unaware: the crisis in Myanmar and New York State Governor Spitzer's proposal to issue driver's licenses to illegal immigrants. Although they were sympathetic to the plight of the protesters in Myanmar (and appalled that the government could halt Internet access), their interest was really stirred by the licensing issue.

Discussion was lively and a bit heated. Their anger was not directed at each other, but rather at a governor they unanimously agreed was doing something very wrong. This story may be useful in coming months, when we discuss the obligation of a citizen to be well-informed and to vote based on the record of candidates.

As we start to dig a bit deeper into current issues, I hope many such "conversations" take place about real events in the real world and how they affect even our small corner of the U.S.

"Between what matters and what seems to matter, how should the world we know judge wisely?" - E. C. Bentley

"News is the first rough draft of history." - Philip L. Graham
Posted by diane at 10:57 AM