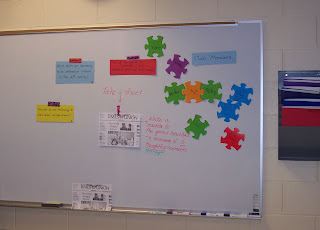 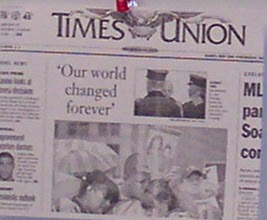 When my students walked into Current Events class today, I asked them to respond to a headline from yesterday's Times Union. The oldest young man in the group was in sixth grade in 2001; the youngest, only a third grader.

I vividly remember the events of September 11. As a high school teacher, I spent the day with our older students, watching in horror as the tragedy unfolded.

At first, my kids had trouble with the assignment, insisting that even a short paragraph was impossible. But I reminded them how our world has changed as a direct result of that Day. One boy intends to enlist in the Navy - serving in a time of war, not peace. Some of the students have taken family vacations in Canada or flown on commercial flights: I explained what travel was like before the Patriot Act.

Rather than using a quotation from a "famous person", I'm concluding with comments from today's class.

Our world has changed. More people have died since then, not only from the dust and debris, but because of the war it [September 11] sparked.


Yeah, I think it changed our world...A good thing is that our country is more alert to things like that now.


It made a huge change to the world. Members of many people's families were killed. We all know that when family members get killed, it affects a lot of people. Those towers were...a symbol for our country...I would love to join the navy and get back at [the terrorists]...


...it seems that no one can trust anyone any more due to the 9/11 attack...the wars overseas seem to be out of control. It's like it will never end.


This was a very sad day in America's history...Our country realized that it was not 'bullet-proof'. Many restrictions were put on daily life in the U.S.A. The terrorist attack on the country has changed us.


It was a really shocking thing that happened. The world has changed because security has stepped up a lot...We have also been in war for a long time and the country has to pay for it, so we have to waste money on equipment for that stuff [war materials].


I believe that 9/11 did change our world. I think it was a horrible event. The way we reacted was stupid...Now, 6 years later, we are still there and taking and losing life. It is time to change and to stand up against political evil and save our world.


9/11 will make our world different for a long time.