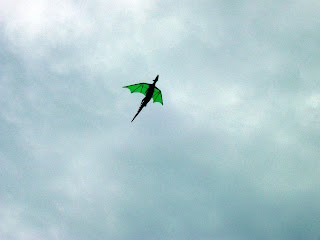 "'Here be dragons' is a phrase used by ancient cartographers to denote dangerous or unexplored territories, in imitation of the infrequent medieval practice of putting sea serpents and other mythological creatures in blank areas of maps." -Wikipedia

There is currently a case in the news which reminds us that we still sail uncharted seas when considering the ethical use of material, in this case photographs, found on the Internet. Vicki Davis noted that copyright laws and personal privacy issues are cited in the lawsuit and intends to use the story in classroom discussions of cyber ethics and digital citizenship.

Obviously, commercial use of Creative Common photos is a hot topic in Flickr. One discussion group member there provided a link to an Australian lawyer's interpretation of that country's street photography regulations (although the girl is American, Virgin Mobile is using the photo in an ad campaign in Australia). It would appear that "until the law changes, consent for general child photography remains purely an ethical and moral issue, not a legal one."

John Pederson posted a statement from Joi Ito, Chair of Creative Commons, which is named in the lawsuit along with Virgin. Ito reminds us that "Creative Commons is about copyright and NOT about privacy or other non-copyright issues. Just because something is licensed under a Creative Commons license, it DOESN’T mean that you can do anything you want with it."

Obviously, there are moral issues aplenty in our brave new cyber universe. Here be dragons indeed.
Posted by diane at 9:05 PM

This is an excellent topic and one that needs coverage. I'm always concerned when I use a photo or graphic I find on the internet. I ask myself if what I am doing is legal, ethical, and moral. I definitely don't use photos if they have a copyright statement attached to it.

I was so skittish about copyright when I began blogging that I only used my own photos, supplemented by my daughter's pictures and my husband's drawings!(the dragon shown on this post is actually a kite I saw at a balloon festival)

As Joi Ito rightly pointed out, images available through Creative Commons must still be used ethically, no matter what their copyright status is.

Victoria A Davis
coolcatteacher.blogspot.com
bookmarked a continuation of the discussion at the abject learning blog
weblogs.elearning.ubc.ca/brian/archives/042331.php

This is an issue that won't go away soon.

It will be interesting to see what emerges from this court case -- I think the repercussions will be felt throughout cyberspace.

Thank you for bringing this to your reader's attention -- it is important to demonstrate all aspects of the Internet and that all isn't just great. We have real people and real issues to consider.

This reminds me of the cowboy shows that were popular when I was young: there was a constant battle to impose some sort of law on the wild and woolly west, where might made right and rules were for weaklings.

I think that the corporate world continues to exist in a bubble of privilege - I just hope that the family involved in the lawsuit doesn't settle for some obscene sum of money before a firm legal precedent is set.