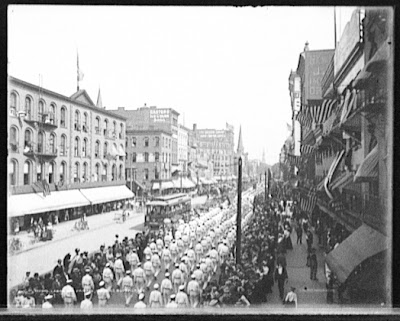 "Labor Day differs in every essential way from the other holidays of the year in any country. All other holidays are in a more or less degree connected with conflicts and battles of man's prowess over man, of strife and discord for greed and power, of glories achieved by one nation over another. Labor Day...is devoted to no man, living or dead, to no sect, race, or nation."
-Samuel Gompers, founder and longtime president of the American Federation of Labor

According to the U.S. Department of Labor, "Labor Day, the first Monday in September, is a creation of the labor movement and is dedicated to the social and economic achievements of American workers. It constitutes a yearly national tribute to the contributions workers have made to the strength, prosperity, and well-being of our country." The holiday was originally celebrated with massive street parades of costumed workers proudly representing their trade unions. These peaceful demonstrations ended in community picnics punctuated by stirring political speeches. The parades have disappeared, but Labor Day addresses by leading union and government officials persist, disseminated via newspapers, radio, television and the Internet.

"America's workforce is the envy of the world!" but warned that “What our country does face is a ‘skills gap.’ In a worldwide economy, the competitive strength of America's workforce lies in its productivity, innovation, creativity and knowledge base. The majority of new jobs created over the next decade will require more skills, higher education and pay above average wages, so it is important to ensure that workers are able to get the education and training they need to access these growing opportunities.”

Chao quotes information found in America's Dynamic Workforce (August, 2007), a DOL special report which "presents an overview of current conditions and notable trends affecting the American labor market and economic activity". Chapter 4, "A Labor Force that Learns", outlines the past and future of the American workforce and, by extension, the necessary focus of our educational system:

"Sixty-five years ago only about one in twenty Americans ages 25 or older was a college graduate. Many jobs required no more than basic literacy and physical skills largely learned through experience. The change in the educational attainment of the labor force since the 1940s has been dramatic. The 21st century labor market seeks and rewards workers who can offer the educational foundation, technical skills and creative flexibility that employers need to compete and to adapt to changing needs successfully. Higher educational attainment contributes to a worker’s ability to efficiently absorb new knowledge and to learn new skills. Workers who can quickly move up the learning curve of a new job have a competitive advantage for economic success."

Our nineteenth and twentieth century agricultural/mining/manufacturing economy has evolved, and our ideas of education and learning need to reflect that evolution. Not all labor is physical in nature: our workforce must also be comfortable with critical thinking, collaboration and intellectual innovation.

"He who labors diligently need never despair; for all things are accomplished by diligence and labor."
Menander of Athens

"A man is not idle because he is absorbed in thought. There is visible labor and there is invisible labor." - Victor Hugo