Visit to Yaddo: A Different Perspective 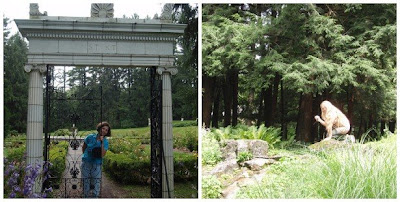 Today, I'm concluding my mini-series on the Gardens of Yaddo, that I began here, and continued here. My daughter, who accompanies me on many of my local Journeys, has agreed to let me include some of the commentary and photos from her private Flickr set.
Where I tend to focus on "pretty" pictures, she looks for the odd angle or the imperfect but interesting detail. Her narrative contains many imaginative elements:

"One purple flower made me think of Queen Elizabeth I; the blossom grew out from its leaf in a way that reminded me of Gloriana's crowned head framed by a ruff."

"There's lots in literature about magic doors and gardens- in Alice, in the Secret Garden- so we took our time admiring the Gate and ironwork before passing through to the Garden."

While I spent a considerable amount of time trying to capture the beauty of the roses, my daughter turned her artist's sensibilities towards the sculptures:

"I was more excited to visit the statuary than the roses. Brookgreen Gardens...and the Nina Winkel Gallery, hidden away in the Arts building at Plattsburgh, are two of my favorite places in the world. At Brookgreen, especially, my eyes refocused permanently, and now, when I see a figurative sculpture, especially one that has been placed outside, I like to look at it till it's alive. For me, Outside is the only gallery that can truly complement sculpture, or at least in the way I appreciate it."

And when I was patiently waiting for the "perfect shot" of the marble figures, she happily incorporated nature into her compositions:

"Autumn had a bug on her foot and a spider nestled into her sheaves of wheat. Winter, who carried pinecones, had a complex look on her face- hidden thoughts, sleeping dreams. Spring was my favorite, with cheeks that looked rosy despite being marble, and flowers spilling all around. Summer had a mischievous grin and carried grapes."

We did agree in our preference for the informal,
less constrained aspects of the gardens:

"I'm not one much for roses, or formal gardens in general. The arranged flowers were pretty, but I found myself more interested in the beetles and bugs and koi fish then the roses. Those poor koi fish- they live in a fountain in the center of the garden, and got so excited when they saw my shadow that I apologized for not having any food. At one point the biggest milky fish and the biggest red fish hopped up at the same time and kissed on the lips. My first ever pets were two goldfish; they were named Diana and Charles, because they looked like they were kissing sometimes, and the big fairytale royal wedding of their namesakes had just taken place, in 1981."

Her description of "nature's barflies" make me laugh, though I don't
share her enthusiasm for photographing tiny "beasties":

"I spent a lot of time looking at the rugarosa roses- they were crawling with beetles and bees, inchworms and other beasties. The roses almost seemed treacherous, as though the insects couldn't unstick themselves- or maybe they didn't want to. Nature's barflies, closing time at dusk instead of dawn. One big bumblebee in a rose was buzzing loud and frantic; I couldn't figure if it was anger or pollen euphoria."

In the end, we both agreed that the Rock Garden was our favorite:

"Of course I liked this sort of garden more, less obvious artifice to the art. Me and Diane looked at the fountain shooting from a dome of rocks in a pool. She saw a stump that could serve as a fairy house, which made me think of the terrain in little-folk terms: valleys and desserts and forests, the fountain an impossible mountain in a lake. I liked the fuzzy purple flowers that grew with the ferns around the pool."

I've enjoyed reading her commentary, seeing the gardens with other
eyes.

Her vision in not my vision, but that's why our shared expeditions are
so special.

Is Yaddo near your home? What a beautiful garden and I love the unusual shots that were taken. Some of the closeups are intriguing and made me stop and look even longer at the images. Thank you for sharing.

Thanks for commenting on all three of my Yaddo posts.

Saratoga, and Yaddo, are located about 16 miles south of my home.

I can't think of a nicer way to spend a few hours than wandering among its paths and inhaling the scent of roses.