After seeing them mentioned a few times on Twitter, I decided to explore two new visualization tools.

Ever wonder, "Who do you talk to most often on Twitter? Who are your closest friends? What does your social network look like?" Then give Top Twitter Friends a try. Once you share your Twitter name, the site starts to construct a web of relationships (for various reasons, this process might take a while; I took a picture after my own "graph" was 88% complete). One sidebar lists the people with whom you have the most interactive relationships, the other suggests those you might want to begin following. 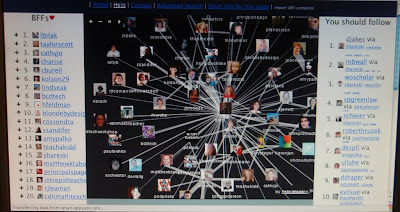 Although at least half of my Tweets are education- or technology-related, I have been dreaming out loud about vacations and the ocean lately. Portwiture highlighted the words, "sea, work, photo, wish, break" in my collage. The resulting mashup may not be too useful, but it is striking indeed. 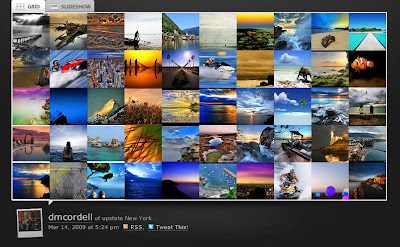 And despite my repetition of the word, there is room in my life for much more than work.
Posted by diane at 6:33 PM

These are tools of connection, and they are both wonderful additions and extensions of the twitter experience. Some day I'm going to meet my twitter BFF face to face.

You're welcome, Kate! If I didn't believe in an eventual meet-up with my online friends, I'd feel as if I were spending my time with cartoons or caricatures.

I just looked at your profile and we have remarkably similar book tastes! Although I am a Pride & Prejudice fan, Emma is in my top three Austen - all three kind of tied for first - I LOVE all the Laurie R. King Mary Russell books and so enjoyed the Pullman. Don't you think the Lord Peter Wimsey books absolutely come alive with Gaudy Night and the addition of Harriet Vane? Who else do you read? April break is on the horizon and that means reading time!! I'm always looking for suggestions.

From Twitter tools to literary discussions - that's how our connective digital world operates!

I like most of Neil Gaiman's books, especially Neverwhere and American Gods. From my history/mystery shelves, I'd recommend the Jane Austen series by Stephanie Barron; The Blind Justice series (18th century London) by Bruce Alexander; the Steven Saylor books about Gordianus the Finder (ancient Rome) and Sharan Newman's Catherine LeVendeur mysteries (medieval France). I also like Laura Lippman's Tess Monaghan stories (set in present-day Baltimore). Not reading much fiction right now, but these are all old friends.