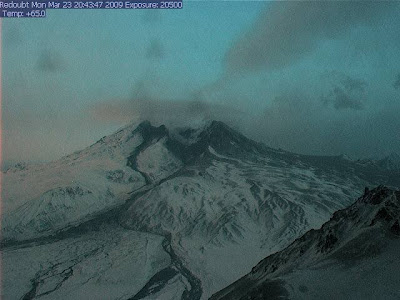 By the time I arrived at school this morning, I had already constructed a lesson plan that included:
Our local newspaper included a small article about the volcanic activity at Mount Redoubt, but there were none of the valuable resources that my PLN (Personal/Professional Learning Network) shared. When I thanked Ted and John, someone else saw my message and was grateful when I passed along the links.

I've had similar experiences on Twitter, learning about earthquakes, fires, and extreme weather in all parts of the world via my web of friends and virtual colleagues.

Plurk, Twitter, and other social networking sites are just beginning to demonstrate their value as educational tools. Though some users choose to focus on trifles and trivialities, that's only one aspect of the endless stream of messages. There is gold among the dross.

Thank you for sharing! What a great way to use a "social network"

I find Plurk and Twitter an unending source of ideas for lesson plans (and blog postings!). They are also my first, best professional development tools.