Oh, the Stuff You Would Learn! 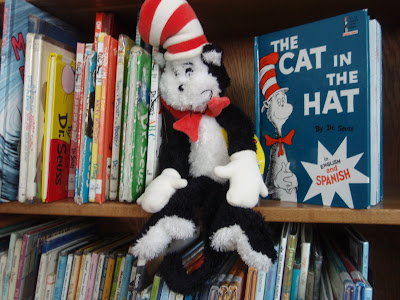 “Young cat, if you keep your eyes open enough, oh, the stuff you would learn! The most wonderful stuff!” -Dr. Seuss

Schools, libraries, bookstores, and art galleries celebrate the birthday of the man who drew and rhymed his way through more than 60 popular children's books.

Although he began his career as an advertising illustrator and political cartoonist, Dr. Seuss is best known for creating such unforgettable characters as The Cat in the Hat, Horton the Elephant, and wily Mr. Grinch.

Geisel maintained "there's an inherent moral in any story." Some of the issues he addressed were environmentalism (The Lorax), the arms race (Butter Battle Book), and anti-materialism (How the Grinch Stole Christmas).

Theodor Geisel died in 1991, and among his papers were notes and sketches for a book about a schoolteacher named Miss Bonkers. Poet Jack Prelutsky and illustrator Lane Smith were recruited to finish the work, which was finally published in 1998.

In Hooray for Diffendoofer Day! We are introduced to a school that

"...looks like any other school
But we suspect it's not.
I think we're
learning lots of things
Not taught at other schools.
Our teachers are
remarkable,
They make up their own rules."

Everyone appears to be happy and engaged, except for the principal, Mr. Lowe:

"He is the very saddest man
That any of us know."

What is the cause of the principal's distress? Why standardized testing, of course! If the Diffendoofer students fail to do well on a "special test," their school will be shut down and the pupils will be sent to "Dreary Flobbertown" where "they dress in just one style" and "they never dance."

As the children start to worry, Miss Bonkers reassures them that all will be well because

"You've learned the things you need
To pass that test and many more -
I'm certain you'll succeed...
And something else that matters more -
We've taught you how to think."

Despite the fact that there were questions about "other things we'd never seen or heard," the students use their critical thinking skills to answer them "enjoying every word."

Seuss and his posthumous collaborators provide us with the requisite happy ending. I'm not sure that the outcome would be the same in our district, state, country, where passing tests typically involves more fact recall than creative thought. Diffendoofer represents unschooliness at its finest.

Perhaps if Dr. Seuss were still alive, he would be serving as a spokesperson for educational reform. And then maybe more children would be able to shout "Hooray for Diffendoofer Day!"

“Sometimes the questions are complicated and the answers are simple.” Dr. Seuss

The first story I read on my own was, "One Fish, Two Fish, Red Fish, Blue Fish." I was in first grade and thought I had conquered the world. In a very important way I had.
Thank you Dr. Seuss, for giving me the love of reading, and an appreciation for fun!

For my kids, "Green Eggs and Ham" was the favorite.

They did so love that Sam I Am
Who did not want Green Eggs and Ham!

You nailed the point that we need to bring back creativity and fun to learning! I sincerely hope that kids had a great time today with books and reading! Dr. Seuss would be so proud!

Imagine a Seuss-inspired curriculum, rich in langugage and art, unfettered by test prep.

Oh, the minds we could nurture!