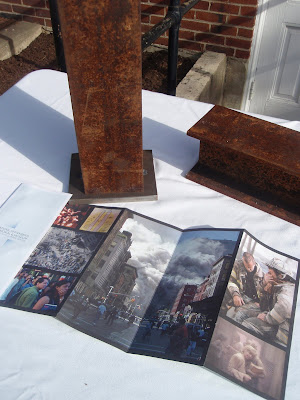 I was a junior in high school when John F. Kennedy was assassinated. Whispered rumors about shots being fired at a presidential motorcade gave way to stunned disbelief as events unfolded. Our nation mourned its fallen leader; the world became a darker place.

I was teaching a 7th grade class in our old MS/HS library, when a social studies teacher asked if he could use one of the computers. He had heard something about a plane crash in New York City and wanted further information. Within minutes, we learned the terrible reality: our country was experiencing terrorist attacks of a previously unimagined magnitude.

Staff members in the elementary (K-6) wing were aware of what was happening, but younger students were shielded from the breaking news. The high school principal set up a TV in the hall outside his office, and another in the auditorium. Students and teachers could watch as much or as little as they chose. Many of us sat in shocked silence for the rest of the day, trying to comprehend exactly what was occurring and its implications for our families and our country.

Last year on September 11, I asked my Current Events class to reflect on the events of The Day Our World Changed Forever. After some discussion, a consensus was reached that "9/11 will make our world different for a long time."

Today, I spent a few moments at a local firehouse. Later in the morning, there would be a remembrance ceremony, honoring both rescuers and victims of the September 11, 2001 attacks. Occupying a place of honor were three rusted lengths of steel, portions of beams salvaged from the World Trade Center towers, destined to be incorporated in a memorial adjacent to the station.

These pieces of metal exert a powerful emotional influence, as reminders of what we have lost.

We can move forward, but we can't erase what has already happened.

Our world has changed forever.

The world was certainly irrevocably changed for the people who lost their lives and for their families. But in general, I have always felt that it was not the world that changed, but the perceptions of Americans who had largely been sheltered from the violence millions of people experience and continue to experience on a daily basis.

I understand what you're saying, but don't totally agree.

As a result of September 11, Americans gave up a lot of personal freedom in hopes of obtaining some measure of security.

There seems to be an increased "acceptance" of violence as a fact of life, both at home and abroad.

We were not so much sheltered from violence as intolerant of it in our daily lives.

If this attitude has altered in any measure, that is a huge and significant change.

Your post captures well our place and time during those events seared in our memory. I was in a Grade 6 classroom hallway with the JFK announcement, teaching a Grade 9 class with 9/11. Events leaving deep emotional scars.

For weeks after 9/11, there were no airplanes in the sky.

My son and I traveled to New Orleans for a family wedding on 9/25/01 and were shocked by the number of armed soldiers in the airports. When we ate lunch, there were no knives available to cut meat - all of the metal ones had been removed and plastic replacements were not yet available.

It was a very scary time. Kennedy's death was mourned as a national tragedy. September 11 was a world tragedy.

You wrote: "As a result of September 11, Americans gave up a lot of personal freedom in hopes of obtaining some measure of security."

You are right. We DID give up a LOT of personal freedom, but I believe it was to obtain the PERCEPTION of security. I truly do not believe we were actually less secure then or are any more secure now from people with equal determination to do harm.

You wrote "There seems to be an increased 'acceptance' of violence as a fact of life, both at home and abroad."

I don't think I'd use the term "acceptance" - more an increased awareness of the possibility that things can and do happen anywhere, anytime. I liken it to the broadening awareness of a child who, as she matures, comes to realize that the world isn't entirely all friendly and nice as she perceived it when she was a child. The world didn't change - her perception of the world changed.

You wrote: "We were not so much sheltered from violence as intolerant of it in our daily lives."

Again, I think I'd use a different word: perhaps "complacent" rather than "intolerant." This type of random violence was and is happening all over the world (think the Middle East, for example), but as long as it wasn't happening on OUR soil, we could disregard it.

I am not trying to belittle anyone's experience or feelings; just trying to respectfully express my perceptions of the event and its aftermath.

Perhaps my world view differs from yours because of my age.

I agree re. the perception of security: some of the precautions being taken now verge on the ludicrous, and certainly can be circumvented by a determined group or individual. I don't feel any safer traveling or attending an event.

I don't believe that Americans disregard violence in other parts of the world. Our compassion is constantly demonstrated as we rush to provide emergency relief services in times of disaster.

I do feel, however, that crimes such as child molestation, domestic violence, and even drunk driving, are more common now. We condemn them, but some of the shock value is gone. I'm not saying that these types of crimes were not committed 50 years ago, only that they seem to occur more frequently now; they've become a fact of modern life.

Thank you for challenging my thinking. Perhaps we each have a part of the truth.