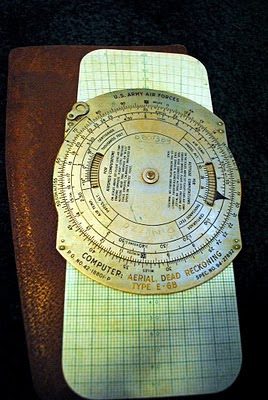 It all started with the snow storm...

Since I've been posting 365 Project photos of ice and snow for the past few days, I decided to look for something from inside our home to feature today, for a change of pace.

When my siblings and I cleaned out our parents' home this fall, I ended up with an assortment of mementos. I've begun scanning pictures, starting with my father's WWII album. In addition to the photographs, I saved some other artifacts.

Today, my attention was caught by a gadget in a leather case, a U.S. Army Air Force "Computer: Aerial, Dead Reckoning" tool. A little research yielded a huge amount of information.

My initial keywords were "Aerial Dead Reckoning;" then I zeroed in on "E-6B."

I learned that this pocket computer is actually a circular slide rule:

"These flight computers are used during flight planning (on the ground before takeoff) to aid in calculating fuel burn, wind correction, time en route, and other items. In the air, the flight computer can be used to calculate ground speed as well. The back is designed for wind correction calculations, i.e., determining how much the wind is affecting one's speed and course." -Wikipedia

Included in the results, I found a forum discussion, an instruction manual, and an aviation blog with a photo of Dr. Spock using an E 6-B! There's a YouTube how-to clip, and a book that serves as both a history and a tutorial. Modern versions of the E6-B are still being sold to pilots, although the case is now vinyl, not leather.

After his discharge from service, my father studied engineering, graduated from RPI, and became a metallurgist (how I loved to fill that in on school forms asking for your parents' occupations!) for the General Electric Company. I'd like to think that this fascinating little metal "whiz wheel" contributed to his survival during wartime, and fueled his lifelong interest in science and mathematics. 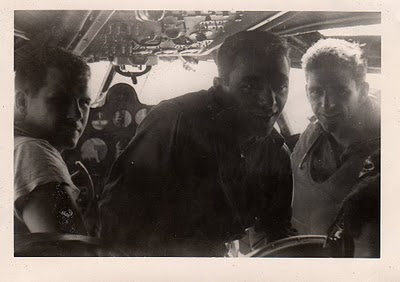 "My eyes are dim I cannot see, I have not got my E-6B with me, over the Valley of the Ruhr." (World War II USAAC ditty)

"His computer is the instrument on which he stakes his life ... Don’t ask for his computer, for he’d sooner lend his wife." (Navigator's Song, 1943)