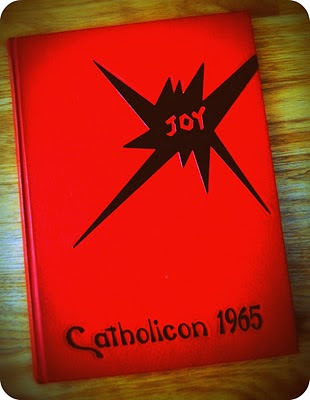 Over the past summer, my high school class held its 45th reunion...which I chose not to attend. I felt disconnected from this particular group of people, not having seen, or spoken with, most of them since graduation.

This situation started to change when a classmate set up a website for the Class of '65. I was contacted by one person on Facebook, and soon there was a flurry of invitations and networking. I found that some of us were kindred spirits, with a lot more in common than I had anticipated.

But the most meaningful connections have been made recently, as one member of our class battles for his life after a heart attack and stroke. Each evening, at 10:00, we share prayers and good wishes, via Facebook, with J.R.'s family (his wife is also a fellow graduate). It has been a profoundly moving experience. Another member of our class shared this reflection:

It has been my good fortune to shake hands with a former President, a few Governers and several statesman . I've been blessed to meet several pro athletes to include more than a few Hall of Famers in both the NFL and MLB.

After bearing witness to the events of this past week, I am forced to conclude that some of the most impressive people were those which whom I passed in the hallways of CCHS. The faith, love and generosity displayed here the past several days make me proud to call a good many of you friends and wish I had gotten to know others better. Salute!

Our class was large for the area, almost 500 members. Since it was a central school, many of us tended to interact with those we knew from our home parishes. Tracking - college entrance, business, etc. - also created artificial barriers. And, of course, there were the standard teenage cliques: jocks, brains, popular kids.

Time, age, and experience have erased most of these differences. Our lives have taken many different paths, but we have a shared history. Although we are interacting virtually right now, I believe that in the future, we will be more likely to seek each other out in real life.

I'm proud to claim these people as friends. We ARE "classmates with class."

Well said, Diane and reflects my experience as well. My yearbook is long lost and I had forgotten that we put JOY on the front. How perfect!

To be honest, I've had to look up some of the FB posters who weren't in "my group." I'll have to scan some of the photos for you. The whole yearbook was very nicely done.

Faces may change - shapes WILL change - hair changes color - circumstances will change - a dolloar is only worth change - but memories of the class of '65 will last forever.
Wish I could just remember :-)

And some things NEVER change, Gary - like your sense of humor!

[Dear Lord - just found myself trying to locate my own yearbook entry by searching under my married name!]

Diane...who would think that something like FB would be an avenue to bring so many of us together, and so strong we are.
what an awesome feeling.

YES, isn't this an awesome use of the social network ?? Let's stay strong for the entire Rivers Family.

Hi, everyone! Peace be with you.

Darcy, I'm active on Twitter as well as Facebook and have acquaintances all over the world, some of whom I have met in person and now consider close friends. Social networking is not a replacement for human interaction, but it can help people with common interests connect. Or, in this case, re-connect.


Marybeth, Knowing that there are so many people who care must be a powerful feeling.


Dennis, Welcome back to the tribe!