Here's the Story: Mercedes-Benz Tweet Race to the Big Game 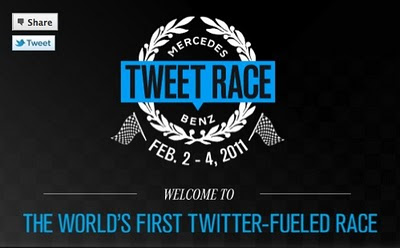 You may have seen references on social networking sites that mention #MBteamS (or 3 other teams I choose not to promote here) and wondered what was going on.

As the Official Team S Storyteller, I feel it's my job to fill you in.

In mid-December, USA Today reported on Super Bowl ads that would "play the social media game"

Mercedes-Benz... plans to launch "The World's First Twitter-Fueled Race," which awards two new cars to the two-person team of social-media wizards that garners for Mercedes-Benz the most tweets, Facebook "likes" and social-media currency by game day.

Today, on its Facebook page, Mercedes-Benz USA issues a casting call for social-media users who want to compete in its Twitter-Fueled Race.

When the chosen teams were announced, I was astonished/happy to see that educational blogger, self-proclaimed "mayor of the Internet" and fellow Packers fan, John Pederson (@ijohnpederson) is co-driver for Team S, along with Todd Sanders, aka @tsand. 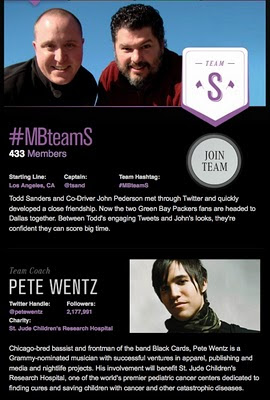 In the spirit of competition, fun, and avarice (participants will be eligible to win a V.I.P. trip and/or a Mercedes!), I followed the steps to join a team, claimed a spot as "one of our human resources" (librarian, photographer, and historian were already taken, but "storyteller" encompasses all of that) and stand ready to Tweet my team on to victory.

It promises to be an interesting social media adventure, and beyond all the hype and hyperbole, there is a worthy cause:

At the core of this contest, behind all the football, fancy cars, and social media silliness, is a $25,000 donation that Mercedes-Benz is making to St. Jude Children’s Research Hospital on behalf of our coach, Pete Wentz, and #MBteamS. Even better, if we do end up “winning” this thing, Mercedes-Benz kicks in an additional $20,000, totaling $45,000, to St. Jude Children’s Research Hospital. -ijohnpederson

3) Finally, claim your spot as one of our “human resources” by giving yourself a role on our team. Visit http://mbteams.com/human_resources and add yourself in the comments.

Become part of our team, and help us write this story. It's social media with a goal and for a cause. How wonderful!

I love reading your stories. :)

Surely there are some interesting backstories - featuring cheese and/or bacon?

eToro is the ultimate forex broker for rookie and pro traders.