A Barge Made of Ice 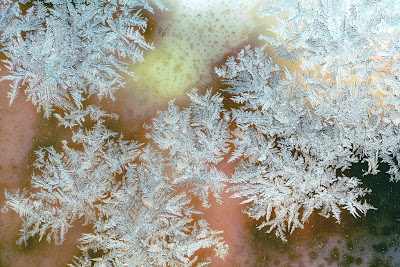 "If you're on thin ice, you might as well dance." –Unknown
For the second time this week, my school district has closed because of icy roads and unsafe weather conditions. So before the power lines come down and my computer winks off, I'd like to share a few random thoughts inspired by ice.

"When the aerials are down, and your spirit is covered with snows of cynicism and the ice of pessimism, then you are grown old, even at twenty, but as long as your aerials are up, to catch the waves of optimism, there is hope you may die young at eighty." -Samuel Ullman

Lifelong learning is a necessary choice in the 21st century, where technology, education, business, and society are in a constant state of flux. New tools offer the unexpected option to interact as an equal with virtual colleagues from all demographics without encountering prejudgment based on age or appearance. Only the vigor of your words reflects your "age".

Long before any of us were born, Samuel Ullman retired from a successful business career and reflected on a lifetime of fearless activism in his poem, "Youth". An early 20th century man with a 21st century mindset, Ullman inspired both General Douglas MacArthur, during WWII, and the Japanese citizens struggling to rebuild their lives and country after that same war:

"When I go out on the ice, I just think about my skating. I forget it is a competition."
-Katarina Witt

Although the drive to succeed is often a powerful motivator, the collaborative spirit is a vital component of the new millennium. A teacher in Maryland can set up an online resource for teachers, be actively promoted by a virtual colleague in another state and gather contributers from around the world. Information is freely shared, credit is given where due, and everyone benefits. A successful workshop or conference conducted by one member of the community is praised and endorsed by all. New voices are encouraged, invited to step into, even usurp, the spotlight. Everyone shares, everyone benefits. We are focused on the "ice" (educational outcome) rather than the competition.


"My advice to you is not to inquire why or whither, but just enjoy your ice cream while it's on your plate -- that's my philosophy." -Thornton Wilder

Ice in its domesticated incarnation is ice cream. While it's impossible to live entirely in the moment, an occasional stop to smell the roses, or eat the ice cream, is not only permissable but mandatory for good mental health.


So today I will do a little work, enjoy some "fun books", catch up on Reader and Twitter, and eat some ice cream.

“We are afloat
On our dreams as on a barge made of ice,
Shot through with questions and fissures of starlight
That keep us awake, thinking about the dreams
As they are happening. Some occurrence. You said it.” -John Ashbery

Just left a comment on Dina Strasser's blog; the two of you both have ice on your minds.

Dina: "As for today, I made a couple of discoveries. One: the seduction of ice.

The marshland borders of the pond where I walked, usually mud two feet deep, were frozen and walkable. Winter is fast becoming a favorite season for me to hike in. Ice allows for exploration that isn’t possible otherwise; and the naked trees give up treasures."

Ice---or an ice day---allows for exploration that isn't possible otherwise. Enjoy your day. Eat some Chunky Monkey for me.

A mug of mint tea, a scoop of Bittersweet Symphony, and thou beside me, twittering in the wilderness...

Delighted to see someone else shares my philosophy of ice cream.

Also glad to see you didn't have to drive in that mess today!!!

I read on Twitter about your ice cream issues last night!

Seriously, I struggle to reconcile my personal style and blog content with the desire to contribute to the ongoing educational dialog that I so admire.

I feel like a lightweight, but I do what I can with whatever gifts I have.

Sorry you had to navigate in the slippery mess.

Hope you got to de-stress by creating more of your gorgeous jewelry!

Cool story as for me. It would be great to read a bit more concerning that matter. Thnx for sharing this information.
Joan Stepsen
Escorts San Francisco