My Heroes Have Always Been Cowboys 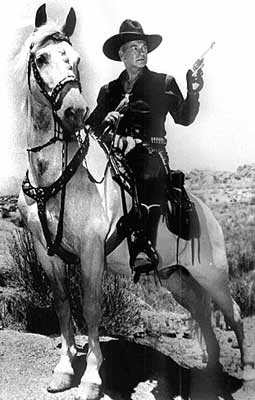 "I grew up a-dreamin' of bein' a cowboy, and lovin' the cowboy ways." -Willie Nelson, My Heroes Have Always Been Cowboys

They were my childhood heroes, the gallant knights of the plains. Soft-spoken and well-mannered, they were slow to anger but always ready to defend the weak and the powerless. The code they followed was based on moral rectitude rather than the rule of law.

There was a nobility in their largely nomadic life. Wandering from place to place on horseback, the cowboy/heroes fought villains, rescued ladies in distress, and righted injustice.

In the early days of TV Westerns, the protagonists were invariably clean in thought, word, and deed, careful to avoid vices like smoking, drinking, and swearing. They rarely indulged in even a chaste kiss with a grateful lady. Their clothes were neat, their teeth gleamed, spurs shone silver in the sun.
Hopalong Cassidy was the original Man in Black, but we knew he was a "good guy" from the moment he began speaking. Singing cowboys like Gene Autry (an Army Air Corps colleague of my father's) introduced us to some of the traditional ballads of the open range.

There was a King of the Cowboys and Queen of the West. Sky King took to the air to track the bad guys. The Lone Ranger donned his mask; the Cisco Kid wore a sombrero. Straight shooting rancher Annie Oakley reminded girls that women could also be strong and independent.

The "cowboy virtues" were recreated in other times and places. Captain Gallant of the Foreign Legion, Sergeant Preston of the Yukon, Davy Crockett: all were cowboys in spirit if not in fact.

Their aim was true, their hearts were gold. They were loners with a mission. They were my earliest role models, those Western cowboys - and cowgirls - of the 1950s.


"I'm a roaming cowboy riding all day long,
Tumbleweeds around me sing their lonely song.
Nights underneath the prairie moon,
I ride along and sing this tune.

See them tumbling down
Pledging their love to the ground
Lonely but free I'll be found
Drifting along with the tumbling tumbleweeds.

Cares of the past are behind
Nowhere to go but I'll find
Just where the trail will wind
Drifting along with the tumbling tumbleweeds.

I know when night has gone
That a new world's born at dawn.

I'll keep rolling along
Deep in my heart is a song
Here on the range I belong
Drifting along with the tumbling tumbleweeds." -Sons of the Pioneers, Tumbling Tumbleweeds