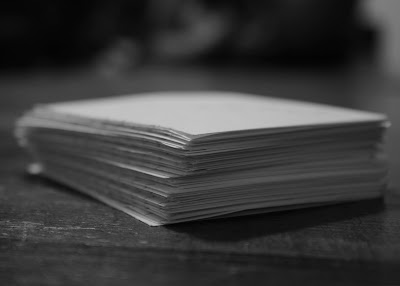 "Value is what people are willing to pay for it." -John Naisbitt
Our elementary principal broke up a crime ring last week.

She happened upon some 2nd and 3rd grade students, participants in an after school activity, who were "stealing" from the library. The object of their villainy? Not books, but the old sign-out cards still found in some of the volumes.

A few years ago, we automated our library. Each book now has a barcode. Consequently, new books don't have pockets with cards to record borrowers. The now-obsolete orange and blue cards have been gradually discarded. But some remain, in the Books That Should Be Weeded, which haven't been checked out in years. These artifacts have somehow become an Object of Desire.

Administrative questioning revealed that the little darlings were not only pulling books off the shelves to search for remaining cards [no wonder our shelves have been such a mess lately!] but they have been trading and SELLING these bits of cardboard!

After delivering a stern lecture (while managing to somehow keep a straight face), the principal took the booty to her office. She shared the story with us the next morning.

The cards do hold a certain fascination. They retain the shaky signatures of students, some of whom graduated years ago, and bear dates ranging from the early '90s to the beginning of the millennium. Occasionally a child will spot an older sibling's name, or, more rarely, that of a parent.

I am now in possession of a few hundred of these relics. They have no extrinsic value, but they were something of value to the children who laboriously searched for them. Perhaps I'll distribute them for bookmarks or as rewards for good behavior. Our little society of students has found these cards to be desirable. I will deal with them in their own coin.

What a pricelss story that would ONLY have meaning today in the 21st century. Guess what? I'm going card searching myself when I go back to work. I can't seem to wipe this grin off my face.

Being a K-12 Librarian has its high points. The little ones can be exhausting, but such fun!

I'm thinking that the cards I salvaged might finance my trip to NECC, if I market them wisely...

I love this story. Having been a child once (ha ha) I can just see that happening! You have a great new tool in your hand with the little ones. Let us know how the valuation is determined - is it the color of the card, the date, or some other variable that determines its worth.

What a cool story - would love to know if this is isolated to your school or if libraries in other schools have seen this phenomenom. Would be nice bookmarks as reward for students.

What a funny story!

Wouldn't it be great to use these cards as a research tool?

Have kids take one and try to find the book it goes with and then get them to help you evaluate if the book should be kept?

Or have them arrange them in a giant timeline that can go up for display? Or have them find the student's photo in the yearbook who last checked out the item?

Sometimes I miss having these "history markers" in our own books. It's fascinating to see that a teacher I worked with 15 years ago had checked out a particular book--brings back memories of collaborations. Or to see that a book flew off the shelf fifteen years ago, but barely moves now, as tastes/times have changed.

Anyway, amazing what becomes "collectible" isn't it? Thanks for the laugh :)

How about commissioning some students to make a mosaic out of them to hang in your library?

Maybe staple some of them together and give them away as old-school notepads?

The math teacher in me wants to find the average number of days checked out per book or make frequency bar graphs of number of times checked out or sort them by type of book and make charts or ... lots of ideas. How fun!

Have to admit that as a child I spent countless hours playing library and cataloguing books on my friend's computer.......and probably would have been one of the thieves in your school :-) I think those kids deserve the cards!

Although I'm curious -- why were the cards were banned? School policy on trading?

Thanks for all the suggestions. The principal threw out the cards she had confiscated, but I know how to find hundreds more (each book had two cards, originally). She laughed when I told her about the posting & responses.

As to why she stepped in and demanded the stash, she saw the kids going through the books after school hours, when they were supposed to be otherwise engaged. I had been letting them keep cards in the books they checked out, but don't encourage that any more.

I'll take pictures, as we try out your ideas.

Thanks for sharing this. I can relate. Personally, I always had an affection for the envelopes that held those cards. I still like them. I can see why this post generated so much discussion.

Diane what about making a mural or collage of them and the covers of the books or photos of them - kind of a snapshot of time past in a library - an historic document and then it is for all to see and admire? Maybe get the collectors to design it- add micro fiche and other outmoded paraphernalia -make it 3d libraryart:)

Those sturdy little pockets are cool, aren't they!

I'll be doing another posting - soon! - to recap all the suggestions I've received, including some from the students themselves.

And I've interviewed a Deep Throat to learn the details of the great card black market!

Good to know it! Coming from NY that may be a new global tendency. :P
In Brazil, those cards will remain being used for a while - in the library I work, not anymore for borrowing, because it's already an automatized task, but for registering dates of local consults on the material.
But I will keep an eye on the treasured ones. ;)

It's nice to have a different perspective - I'll be sure to share all the responses with my students!

It is a shame to have stopped the children from their treasure hunt. Surely the draw for the cards led to other adventures in reading. Why throw them away though? They could have been used as a collage or some other project. Seems a shame to thwart creativity and adventure like that. They are kids afterall.