My daughter and I set off on an impromptu adventure yesterday, a road trip through rural Washington County, NY. 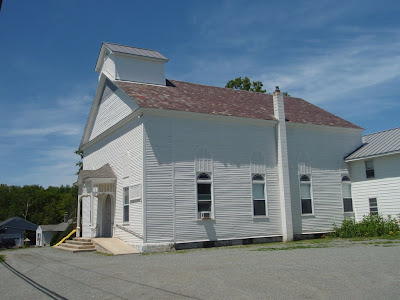 Across the street was Bethany Cemetery, Truthville, NY.

My initial thought was to take a few pictures of some graves, presumably of veterans, which were decked out in patriotic colors for the Fourth of July. But it didn't take long for my interest to broaden.

The shared headstone of Cora and Harold Douglas celebrates their long life together: "Whither thou goest I will go". Little Tanya Susan Cain was only on this earth for two days; a tiny lamb graces her resting place.

The older stones bore their own truths. Most of the women were either "the daughter of" or "the wife of" someone, having surrendered a part of their identity to their male relatives.

Many females died in their late teens or early twenties. Did childbirth carry them off at so young an age?

What tragic chain of events claimed the life of Eliza Corbin "who was drowned at Whitehall Landing, July 26, 1825, aged 18 years & 8 months, leaving a sorrowful husband & many weeping friends."

Sally Baker's large stone is elaborately decorated. Does her anchor symbolize faith, or was her husband or a family member involved with ships or the Navy?

Jeremiah Brownell was born in 1731 or 1732. Did he bear arms in the French & Indian War, then pick up his musket again in middle age to join the Colonials in their fight for independence? Was he a Loyalist? Or did he arrive in upstate New York after the battles were done?

What manner of person was Chapin, whose irregular rock bears a single name, with no other information? 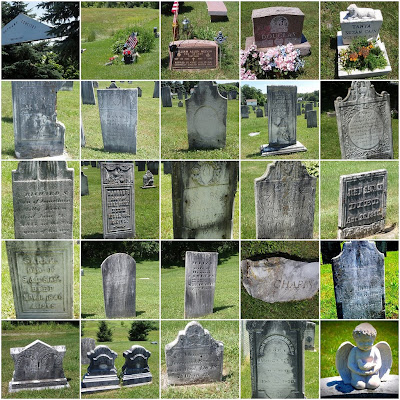 The little cemetery at Truthville reminded me of Spoon River Anthology. Edgar Lee Masters recreated an entire community by sharing narratives of the departed residents of a fictitious town.

We can only guess at "truths" of Truthville. These crumbling inscriptions give no sense of the fire and passion of the people who once bore these names. Perhaps that is exactly what they would have wished.


"Truthville" set on Flickr
Posted by diane at 4:40 PM

Cemeteries can be a great place to enjoy history and human nature. Reading the dates, the names, the occasional inscriptions.

One nearby cemetery is situated on a promontory overlooking the lake. There is an ediface 12 feet tall there. Quite a monument to someone's life but somewhat pretentious to take up the space for centuries.

Enjoyed your posts and pictures.

Thanks for stopping by. Tombstone inscriptions are fascinating primary source artifacts.

Students might write about the person as they image them (a la Spoon River), conduct extended research about specific individuals or families, even write epitaphs (maybe for literary or cartoon characters?).

There are opportunities for learning everywhere!

Did I ever tell you about the first person buried in the cemetery next to my parents house? (late 1700s I believe)

If not, remind me some time, it's way too long for a blog comment :)

Sounds like Ellen & I - and my camera - should pay a visit there. I had no idea that cemetery was so old!

I'd also like to take the Glens Falls cemetery tour, when costumed reenacters portray the people buried there. [that would also be a great project for students: to research & present as former residents buried in local graveyards]

That cemetery is not well kept, unfortunately, or at least it wasn't when I was a kid. A lot of the stones were broken and tipped over. Still neat to look at the old dates.

God I love this one. Tombstones are bottomless, aren't they? Nice trip you took us on. Chapin particularly disturbs me. I fear a lonely funeral and grave way out here, but don't mind really, as I won't notice at all ;0)

i enjoy trips to grave yards. sitting there and wondering what the people were like always interested me. the only place that i could not do this was in my recent trip to Arlington cemetery, for some reason i couldn't. however i can do it any other time place. i once saw a tomb stone of boy around my age, that had died in 1895, it was somewhat weird. anywise, fell free to read my blog if you wish to.

Perhaps Chapin was just a non-conformist to the end. No matter where your mortal remains end up, your spirit will roam free :-)

Thanks for stopping by. I've always loved the serenity and quirkiness of older cemeteries. My dad is buried in a national veteran's cemetery similar to Arlington. I find such places too cold and symmetric for my tastes - inscriptions are terse and depersonalized, no real sense of the individual who rests there.

I certainly intend to read your blog - always happy to hear another Voice.

Jackie,
I have been doing some genealogy research and many of my ancestors are buried in this cemetery.

I found one relative. The wife of a half brother to my G-G-grandmother. Mary wife of William Rhodes died 1813. Thanks for the posting.

Have you ever thought of posting this the the web sight findagrave.com?

I'll explore that idea. I did a posting on another local gravesite here:
http://tinyurl.com/p7k6ge

My daughter and I plan to visit Truthville again. Are there any other names you'd like us to search for?

Diane,
If you go back to Truthville I am interested in a photo of the headstone for James Darby. His grave should be in row 6 next to Nathan Rhodes and Mindwell Rhodes.

I'll be visiting Truthville again some time in July. I'd be happy to take photographs for you!

Hi thanks for the great pictures. When I was a child, my parents would take me and my sister upstate to visit relatives in Truthville and Glens Falls. My Great Aunt Bertha Kenyon Rice and her husband George Rice owned a big old house along a rocky creek in Truthville. They had a son named William (Bill) Rice too. Bertha was born around 1875 and died 1957. Did you happen to see any gravestones for them or any other Kenyon's per chance? I ask because I have been doing the genealogy of my family since 2007. My name is Dodie Kenyon Ricca-Sando and I am on facebook under Dodie Kenyon Ricca. My email is dodiericcasando@comcast.net. Any info would be so much appreciated. Thanks for posting this blog.