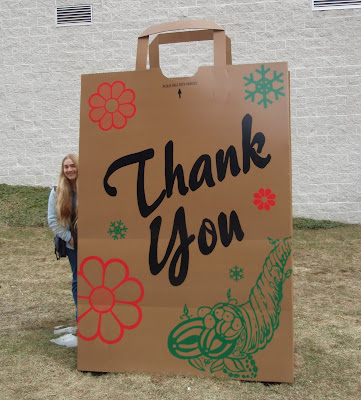 Original sculpture "Politeness Counts" by Jonathan Seliger. 2004 (Auto body enamel on aluminum)
Last April, I featured a guest posting, Fly on Your Heavy Feet. The author, my older child and only daughter, does not have a public blog but continues to entertain and enlighten family and friends via her private Flickr account. She and I periodically share adventures, and this weekend we spent some time at the Tang, on the Skidmore College campus. With permission, I'm sharing her description of our visit to this gallery.


We were greeted outside the entryway by an enormous paper bag! ("Politeness Counts" by Jonathan Seliger) The draw for me and Mom had been William Blake's illustrations, on loan from the Special Collections of the library, but along our way to Blake we were knocked out/intrigued by Oliver Herring's Me Us Them exhibit and the Tim Rollins and KOS retrospective.

The first works we encountered in Oliver Herring's exhibit were knitted sculptures ("Queensize Bed with Coat") and wall hangings (“An Age for Hands”) made of shiny mylar. My eyes feasted, mom's fingers itched to touch - she being an accomplished knitter, me being a crow who likes shiny things, we had an equal, but right differently informed, appreciation of the art! There was a video piece on multiple TVs ("Little Dances of Misfortunes") - I saw passing moments of abstract art, wild shapes created from the play of green light on people moving and at rest - but liked the tinkling music best of all.

The rest of Herring's works sprung from photography. Me and Mom are both compulsive picture takers so we loved this. Herring made still images live, to me, by rearranging, embellishing and, most revelatory for me and Ladybird, bringing photos to the third dimension. So there were pictures painted over with vines, leaves and flowers; sets where a photo has an absence, like a cut-out eye, the eye reappearing pasted-over a different picture; photos where the careful use of cutting created designs from the absence, around the pic's subject.

But it was the photo sculptures which were undeniably our favorites. Taking untold amounts of cut-up photos, crafted onto a frame and sheets of styrofoam, Herring made life-size sculptures of a woman (”Gloria”), an eagle, and a naked man (made twice, facing himself). I have no idea how much planning and work this must be, because they were all wonderfully proportionate, and grew more beautiful under a hard stare, when you'd think they'd get more eerie and disjointed. Little details, like bits of picture of hair actually curling out from the head, or a necklace flat on the neck in one section of photo cut out and drawn from the body at another angle- done so seamlessly I didn't notice till Diane pointed it out - just filled me with a quiet amazement. I looked into the naked man's eyes for a while. I always think, when seeing figurative sculpture, that the people are a moment away from drawing in a breath - I guess a lot like thinking your dolls walk and talk when you're not looking, in childhood - so this combination of photography and sculpture was fascinating to take in.

Looking for Blake, we stumbled (down the rabbit hole) into the Tim Rollins and KOS (Kids of Survival) retrospective. Passing a table scattered with tasty books- Alice in Wonderland, Dracula, Kafka - seeing paintings of Frankenstein and Moby Dick, we quickly realized that all of the works were inspired by classic lit, and most used actual book pages as their canvas.

"In August 1981, Tim Rollins, then twenty-six years old, was recruited by George Gallego, principal of Intermediate School 52 in the South Bronx, to develop a curriculum that incorporated art-making with reading and writing lessons for students who had been classified as academically or emotionally 'at risk.' Together, Rollins and his students developed a collaborative strategy that combined lessons in reading and writing with the production of works of art. In a process they call 'jammin,' Rollins or one of the students reads aloud from the selected text while the other members draw and relate the stories to their own experiences. Their signature style was born as Rollins and K.O.S. began producing works of art on the pages of these books cut out and laid in a grid on canvas. Rollins and K.O.S. have produced paintings, prints, photographs, and sculpture based on literary texts such as Franz Kafka’s Amerika, Harriet Jacob's Incidents in the Life of a Slave Girl, William Shakespeare’s A Midsummer Night’s Dream, and musical scores, including The Creation by Franz Joseph Haydn. In 1985, they adopted the name 'Tim Rollins and Kids of Survival.'' -Tang calendar

In a little offshoot of a room, I was faced with a blank canvas and logs scattered on the floor. Just when my mind was about to shut itself against the impenetrability of this, I looked down at a log near my foot and saw eyes staring up at me. I was in love. While I read the sign and realized I'd just met Pinocchio, my mother walked towards the big blank canvas and told me I should, too. A few steps closer... and there was Alice! Somewhere, somehow, between the pages of Alice in Wonderland forming the background, and the gleaming white paint of the foreground, the artist had hidden Carrol's sketch of Alice, from the handwritten version of the story he first gave to Alice Pleasance Liddell. And I almost missed it by not seeking, by being closed minded!

Other then those two, which I loved with the religious-zest that sometimes comes upon me, there was a piece with ribbons, based on "Incidents in the Life of a Slave Girl" I liked. I would've looked at that and others, like Midsummer Night's Dream, the Holy Bible tower and works sprung from Homer, Aeschylus, Aristophanes, if there hadn't been a particularly enthusiastic student docent expounding on everything to a tour group, at a volume so high I couldn't think straight to experience anything!

Me and Mom found quiet, and Blake, finally, in a little side hallway near the entrance, representing the Marriage of Heaven and Hell exhibition. I can't look at anything Blake without thinking of two things: the tree of angels he saw when he was a young boy,

and lines from Mary Oliver's poem The Swan,

"…Said Mrs Blake of the poet: /I miss my husband’s company/ He is so often in paradise."

Mom, while a student in London, saw the originals of Blake's art at the Tate. In the Tang we viewed prints from rare books, as opposed to actual woodcuts or sketches. The KOS take on Blake's poem The Sick Rose, from Songs of Experience, lined a wall facing a small book of his poems in a case. The KOS paintings were all little watercolors, reminding me of the insides of geodes Mom and I saw at Natural Stone Bridge and Caves last summer. We both enjoyed the way Blake made his Satan snake (just like Indiana, Mom, usually, hates snakes); thought the D'aulaires must have been very inspired by him, as his God and Job look a lot like their Zeus; saw illustrations from Night Thoughts, a book I'd just seen mentioned as reading material of Emily Dickinson's father, in the bio of her (My Wars are Laid Away in Books by Alfred Habegger) I began after me and Mom saw Belle of Amherst a few weeks ago, at the Charles R Wood Theater of Downtown GF, motherland!

On our way out we stopped to see if they had a catalog of Oliver Herring's exhibit; they didn't, but the lady told us that next week he was staging a participatory work of art in Saratoga, which we could sign up for if we wanted: TASK, an improv piece. The artist has said in an interview that TASK pieces, are

"...almost a game—a reality game. I set up basic rules, such as 'don't leave the parameters of the stage.' I provide a bunch of props. In the case of TASK, I write a bunch of simple tasks in order to get the performance going. Each one goes in an envelope and is put in a task pool, and the performance starts with each participant taking an envelope, opening it, and trying to fulfill that task. Once they’re done, they each write a new task, put it back in the task pool, grab a new task, and go on with business. After the first five or ten minutes, the performance is entirely self-perpetuating. You don’t know what’s going to happen. The rules that I start with are not binding. Anybody could just walk out, or break the rules. But that never really happens. I’m always surprised that there’s no real anarchy—only staged anarchy."

I was intrigued, but since it's an investment of at least 8 hour's time decided not to apply! On the way to the car I had that fun perception of everything as art - garbage on the melting snow, puddles, shouting rugby players. Art, art that engages, art that turns you off, what is it all really but looking and seeing whatever is appearing before you? And by seeing it from the eyes of your own little world, making it something more - art?
Posted by diane at 6:10 PM

Whether hiking in the woods or touring an art gallery - it's always an adventure with her!

Yes, it certainly is (and has been that way her entire life!).

I'd love to use some of your Firetower descriptions as guest postings sometime. Let me know when you're ready!

HA! You're more than welcome to borrow any of my pictures or posts, but Ellen is much better at writing than I am...

I love a challenge. Will troll your blog for possibilities.